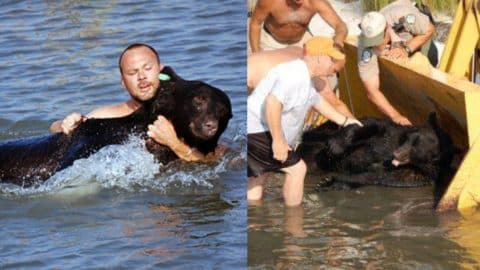 Adam Warwick, a Florida Fish and Wildlife Conservation Commission (FWC) biologist saved a 375-pound bear from drowning off the shores of Florida’s panhandle.

The bear was first spotted roaming the neighborhood scavenging for food near Alligator Point, Florida and a resident called the police. That’s when FWC officers arrived on the scene and shot the bear with a tranquilizer dart. However, things started to go terribly wrong.

The bear took off into the ocean and began to take on the challenge of a four-mile swim to the other side. The FWC biologist watching from afar knew the bear was going to drown if it was left alone sedated in the water, so he took off his shirt and shoes and handed them to his colleague, and began to swim towards the bear.

He told CBS, “I got in front of him, tried to create some splashing and some commotion and tried to get him to go back into shore. But he wasn’t having any of that. The scariest part was probably when he started looking at me as if he wanted to climb up on me to keep from drowning.”

The bear reared up on his hind legs standing six-and-a-half-foot tall and instead of lunging forward, he fell straight back into the water and was submerged for a couple of seconds. That’s when Adam moved in and held his head up above the water to keep it from drowning.

“Warwick kept one arm underneath the bear and the other gripping the scruff of its neck to keep the bear’s head above water. Warwick said he walked barefoot over concrete blocks crusted with barnacles in the 4-foot-deep water as he tried to guide and use the water to help float the bear back to shore,” CBS reported Adam saying.

Once he got the bear back to shore, that’s when authorities used a backhoe with a bucket to lift the bear out of the water and placed it in the back of a wildlife officer’s truck.

The bear was safely transported to Osceola National Forest where it was released back into the forest to live out the rest of its days.

The incident happened back in 2008, check out the footage of it below.