Man Uses Alligator To Shotgun Beer While Listening To Skynyrd 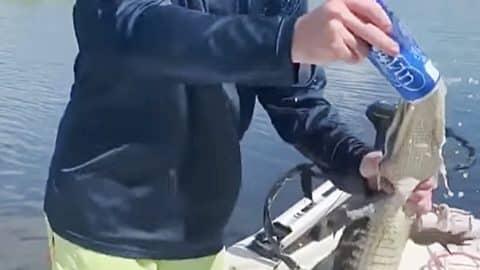 Some people do silly things when buzzed off booze and this is definitely one of those times.

According to OrlandoWeekly, an anonymous guy, allegedly from Florida, posted on his Instagram a video of himself in the swamplands on a boat. Standing in the middle of the boat, a beer in one hand, and an alligator in the other, he readies himself.

With “Sweet Home Alabama” playing in the background, the man gets the beer close to the alligator’s mouth and the baby gator bites the can. With its sharp teeth, it quickly makes a hole and beer begins spraying everywhere.

The guy pulls the can away from the gator and proceeds to shotgun the beer. He drinks it all until it’s empty then tosses the alligator back into the water. Another voice can be heard in the background saying “hell yeah” as the gator dives back into the swampy water.

Searching For The Mysterious Man

The video was first posted on Instagram under the account @504ollie which has now changed its privacy settings to private making it not accessible anymore. However, before that happened, someone downloaded the video and shared it across multiple social media platforms. Including one account called Drunk People Doing Things, where it has received over 3 million views.

Sources say the Florida Fish and Wildlife Conservation Commission are trying to figure out who the guy is so they can prosecute him. People have definitely done less and faced the courthouse for it. One guy got arrested in 2018 for carrying a gator into a gas station, while another man was arrested for putting a cigarette in a gator’s mouth.

So if you thought this was cool and want to do it, maybe you should consider your freedom first and leave the swamp creatures where they belong.