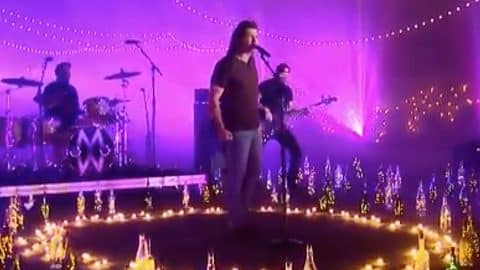 This performance was Morgan’s first appearance since the cancellation of his debut on Saturday Night Live and public apology for his actions resulting in the cancellation.

The country singer was removed as the musical guest from SNL after videos surfaced of him partying maskless, and not following social distancing protocols a week before his scheduled appearance.

“My actions from this past weekend were pretty short-sighted, and have obviously affected my long-term goals and my dreams," Wallen stated in a new video.

On October 7, 2020, Morgan posted a video of himself on social media explaining that his appearance on SNL had been canceled due to him violating the show’s COVID-19 protocols. In the video, he apologized to his fans, his team, and SNL admitting he needed to take a break from the spotlight to work on himself.

Exactly two weeks later, Morgan graced the CMT Awards stage with his performance of “Chasin’ You.”

Morgan has had multiple number one hits, including “Whiskey Glasses,” Chasin’ You,” “7 Summers,” and his collaboration with Florida Georgia Line, “Up Down.”

He is nominated for the CMT Award Male Video of the Year for “Chasin’ You.”

Will @morganwallen take home the #CMTaward for Male Video of the Year? We know he will be raising some “Whiskey Glasses” if he does! 🥃 Don’t forget to tune in to the show Oct. 21st at 8/7c! 🎨: @hamedhazel #CMTxHaméd

Due to the ongoing pandemic, the 2020 CMT Awards looked a tad different this year, pivoting from a huge celebrity and fan-filled live arena to a more intimate multi-location production with some pre-taped performances and special live elements sprinkled throughout.

The CMT Awards called upon some of country music’s biggest stars, including Luke Bryan, Ashley McBryde, Shania Twain, Luke Combs, and Brooks & Dunn to ensure an impressive night of performances.