One Friend Wins, Other Sent Home After Epic ‘Johnny B. Goode’ Battle On ‘Dancing With The Stars’ 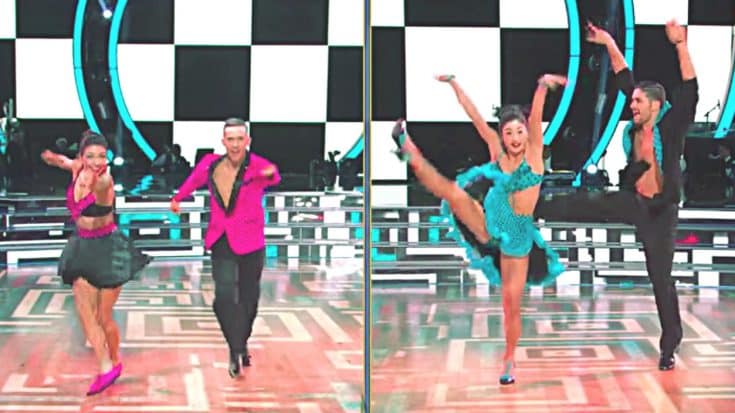 Dancing With The Stars Switches Things Up

This season of Dancing with the Stars is just a bit different than the ones you’ve watched in the past. First of all, the season is shortened, lasting only a few weeks. Because of this, multiple couples have to be eliminated each week.

Secondly, this season is different because it’s an all-athlete season. The cast has included figure skaters, a softball star, a basketball player, and more.

Since they all work in the same sphere, many of the cast members are close friends…but that doesn’t stop them from being competitive. Even best friends and figure skaters Adam Rippon and Mirai Nagasu have struck up a bit of a rivalry during their time on the show.

Best Buds Battle Over The Jive

Dancing with the Stars decided to play on that rivalry when it came time for the couples to engage in the ballroom battle round. They paired Rippon and Nagasu in the battle, forcing the two best friends to go head to head with each other.

The two were up for the challenge, and worked hard in rehearsals. Their task wasn’t an easy one, since they were given the jive as their dance. If you’ve seen Dancing with the Stars in the past, you know just how difficult the jive is to execute.

But Rippon and Nagasu didn’t let the difficulty of the dance hold them back. The second they burst out on the stage to dance to “Johnny B. Goode,” they made it clear that they were both going to bring their A game.

The two skaters danced right next to each other with their partners, which you think would be distracting. But after she wrapped up the dance, Nagasu said she was just so focused on remembering her steps that she didn’t even think to look over at Rippon.

If she did glance over at him, she would have seen that he was doing just as well as she was. In fact, the judges loved both of their performances so much that when it came time to pick a winner, the votes were tied.

Since there was a tie, it was left to the home viewers’ votes to pick the winner. They ended up selecting Rippon, who earned over 60% of their votes.

As the winner of the battle, Rippon had bonus points added to his already impressive score from his other dance. After falling one ten short of a perfect score for that dance, Rippon was a clear frontrunner of the night.

When it came time to reveal who would be moving on in the competition, it was no surprise that Rippon was named as one of the three finalists. But unfortunately, Nagasu fell short of being able to move on, and she was sent home.

Even though Nagasu’s time on the show is over, she’s still a winner in our eyes. Just watch her epic “Johnny B. Good” jive battle against Rippon to see what we mean!