By Miranda Raye on March 13, 2019
Advertisement 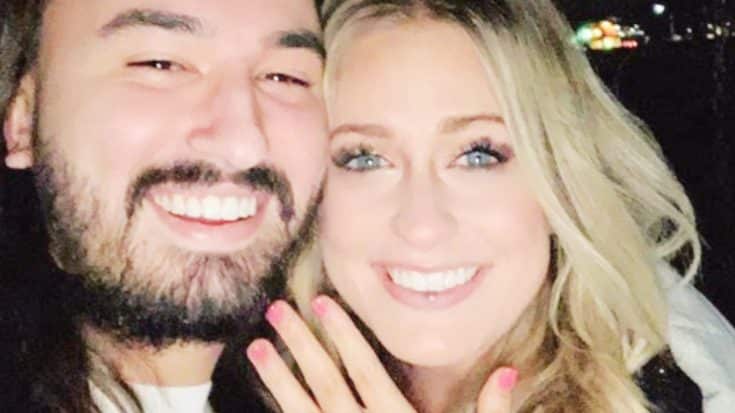 A Proposal Boom In Country Music

Love is definitely in the air in the country music community right now!

While the past two years have been a bit of a country baby boom, 2019 has proven to be the year of the engagement. In just the past week two country singers have gotten down on one knee and popped the question.

“All On Me” singer Devin Dawson proposed to his girlfriend of two years on top of a rooftop bar in San Francisco. Before that, “Stealing Cinderella” singer Chuck Wicks asked Jason Aldean‘s sister Kasi Williams to marry him while on a romantic winter wonderland getaway.

About last night….. I lOVE YOU @kasirosa ❤️ We could hear a pin drop in that woods. Nothing but us and the snow falling. It was absolutely perfect. Even if the camera stand I got just for this moment was having some issues. Lol. I’ve waited forever for you and now I will forever be yours. #arewedreaming

The love kept on coming, as one of country music’s rising stars announced her engagement on Tuesday night (March 12).

An Artist To Keep Your Eye On

Rachel Wammack‘s career may just be getting started, but she’s already making waves in the industry. The young singer from Muscle Shoals released her debut EP in April 2018.

You’ve likely heard her song “Damage,” which has gained a wealth of traction since it was released. As of press time, the song’s official video has nearly 300,000 views.

Wammack is definitely someone to watch in country music. This was confirmed by popular country radio host Bobby Bones when he named Wammack as one of the artists in his “Class of 2019.”

The artists Bones chooses for his yearly class are ones he feels have the potential to make an impact on country music. He’s usually pretty spot-on with his picks, as past class members such as Luke Combs, Aubrie Sellers, and Morgan Evans have all gone on to experience immense success.

The #ClassOf2019 showcase show in Nashville has been announced! don't miss this ?? more info at link in bio!

Her Ring Is Jaw-Dropping

Being named to Bones’ Class of 2019 was a good way for Wammack to start her year, and now it just got even better because of her engagement!

Wammack joyfully shared the happy news on social media, revealing that her boyfriend Noah Purcell had popped the question. The two have been dating since at least May 2017, as they posted photos looking quite couple-like back then.

Wammack didn’t spill any details about how the proposal was orchestrated, but she did share a photo of her stunning ring! The photo shows a giddy Wammack and Purcell while Wammack holds up her newly decorated ring finger.

While the photo was taken from too far away for us to clearly see the ring, we can tell that it’s drop-dead gorgeous. That diamond looks huge!

Wammack kept the caption simple, writing, “I’M GOING TO BE MRS. NOAH PURCELL!!!!!!!“ She included a heart, a ring emoji, and the date of their engagement, which was Monday (March 11).

They look like they’re over the moon with joy! Congratulations to the happy couple…here’s to a happy future together.

With a lovely new ring and a bunch of outstanding music, Wammack has her fair share of reasons to celebrate this year!