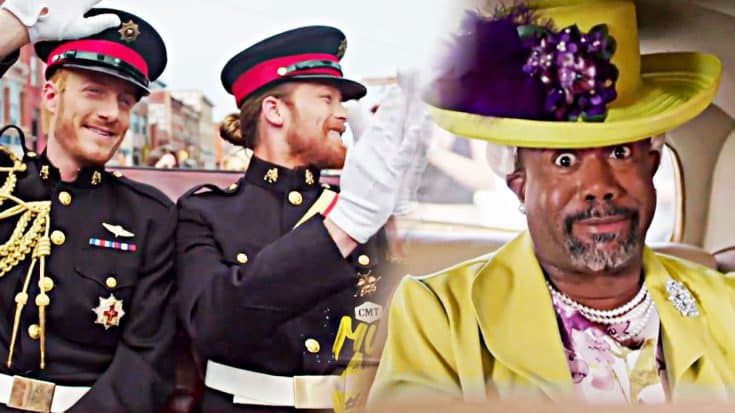 The opening scene to the “Biggest Party of the Year” was filled with hysterical jokes and endless laughter and featured a massive number of cameos – even The Queen of England made an interesting appearance!

The 2018 CMT Music Awards did away with the traditional award show monologue and string of silly, slapstick jokes. Instead, they decided to frame up a fake newscast filled with current event humor and went “on-location” with some “reporters” that were covering the Royal Wedding mania sweeping Nashville.

A total parody of the coverage surrounding Britain’s recent addition to the Royal Family, this opening sketch saw Florida Georgia Line riding through the streets of Nashville atop a horse-drawn carriage dressed prim and proper like royalty should be!

“Brother, I feel a little bit posh,” Brian Kelley announced. “Indeed,” Hubbard replied in a spot-on British accent. “And I like it,” Kelley squealed.

Queen Darius Rucker was also on hand throughout the event along with Blake Shelton, Kelsea Ballerini, and other fun country stars posing throughout different parts of the video.

If you didn’t get a chance to watch the humorous clip – or even if you’ve already seen it, click the play button below and have a laugh all over again!