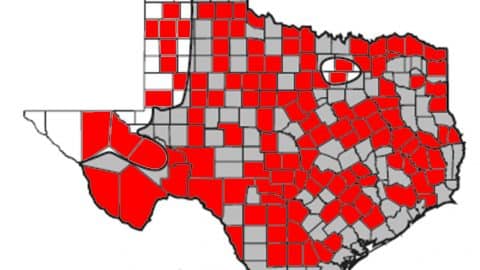 Feral Hogs Are Taking Over Texas

Introduced to the region by Spanish explorers over 300 years ago their population and numbers are so strong that they are now considered one of the biggest nuisance animals in the state. It is estimated that over 1.5 million hogs exist in the state (if not more).

Texas isn’t the only state that is being over-run by hogs however, others include: Alabama, Arizona, Arkansas, Florida, Georgia, Louisiana, Mississippi and Oklahoma

Feral hogs look relatively similar to regular domestic hogs. They have similar coat and color patterns. They also range anywhere from 100-400 lbs! Surprisingly, they can be very quick even with their large size and very dangerous if aggravated or provoked. Razor-sharp tusks that protrude from their mouths are very dangerous to humans, livestock and any animals they encounter.

Feral hogs have relatively few predators in Texas and are able to reproduce at as early as 6 months of age. Typically they will give birth once or twice per year.

Since they don’t have manly predators in the region aside from obscure mountain lions, they reproduce and exist with relatively un-checked growth rates. Their population has grown to the point where they are a very real threat to wildlife preservation, agricultural production and livestock safety.

Given the massive population growth that is continuing to take place despite regulated efforts to manage and maintain the population —Texas has allowed for hunting and trapping of these animals at all times of year. More information is available in the video below on the impact this evasive species is having on both wildlife and the human population: