By Manly Bryant on October 26, 2020
Advertisement 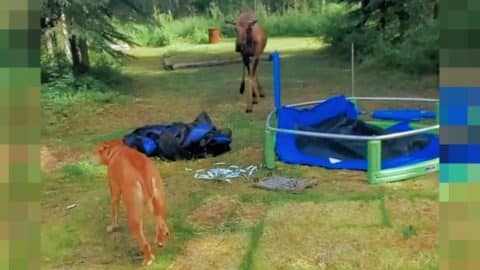 A woman living in Alaska was enjoying the good weather with her dog Brody in the backyard when they found themselves encountering the largest wild animal in the area, a bull moose.

The woman, later identified as Sarah, recorded a video of the moose running up on her dog and she posted the video to TikTok. The video showed the moose coming from out of nowhere and walking towards Brody.

The walk turns into a charge, and the moose puts his head down ready to use his antlers on Brody. However, it doesn’t take the pup long to realize what’s going on and he quickly tucks his tail and runs out of the moose’s way.

The moose stops charging, so Brody stops running and turns around to face the moose. Brody started walking back towards the moose as if he was curious about him or maybe trying to guard Sarah. Worried for her dog, Sarah yelled for Brody to back away from the moose.

She tells him to follow her back to the house and Brody obediently does. The moose holds his ground as the two make their way across the yard and through the garage door. Sarah closes the garage door as soon as she had Brody in the house.

Fortunately, nobody was hurt during the encounter.