By Manly Bryant on November 5, 2019
Advertisement 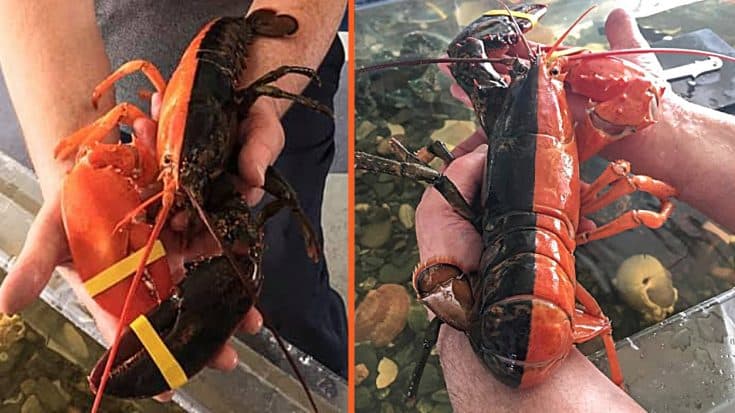 Captain Daryl Dunham was fishing off the coast of Stonigham, Maine in September (2019) when he captured an incredibly rare lobster split with half orange and half black colors.

We’ve seen some pretty cool lobsters in our marine touch tank over the years, but this one might be a first! Visit Discovery Wharf and learn about Maine’s iconic lobster fishery and more! . Thank you to island fisherman, Captain Daryl Dunham, F/V Force of Habit, for sharing this unique lobster with us and our touch tank. . . . #DiscoveryWharf #MaineLobster #MarineTouchTank #EducationCenter #LobsterFishing #GulfOfMaine #FishForever #SaltWaterFreshThinking

The Lobster Gets Put On Display

The pigmentation colors of the lobster is perfectly symmetrical and will only happen to one out of every fifty million lobsters. Daryl was very excited when he found the crustacean and immediately brought it to the Maine Center for Coastal Fisheries for them to take a look at.

Posted by Maine Center for Coastal Fisheries on Friday, September 6, 2019

The Center was so impressed they offered to put it on display in their educational center, Discovery Wharf, in which Daryl agreed to. The orange and back lobster was then put into a tank that had three other super rare lobsters.

The MCCF team is still marveling over these unique lobsters that local/island fishermen have delivered to our marine touch tank. It’s a rare occasion to have a blue, half-split, and calico lobster(s) in our tank at once. . Discovery Wharf is closed today, but we reopen on Tuesday. If you’re in #StoningtonMaine – stop down and say hello…??? . . . . #MaineLobster #DiscoveryWharf #ImmerseYourself #LobsterFishery #MarineTouchTank #GulfOfMaine #SaltWaterFreshThinking #FishForever

Plans For The Orange And Black Lobster

According to the report, CoastalFisheries.org shared on their website the Center plans to keep the orange and black lobster on display for a while so people can view and touch the majestic creature. Later it will be released back into the New England bay where it was captured.

The Center also released a statement saying they’d like fishermen to let them know if they happen to find any more rare lobsters they can put on display at their educational center.

“If a local fisherman finds a unique lobster (such as a blue or two-toned lobster, etc.), they are welcome to donate it to our marine touch tank for educational purposes,” the Center told WTHR, according to The Epoch Times.

Watch The News Report On The Lobster Below