By Jennifer Pernicano on April 13, 2020
Advertisement 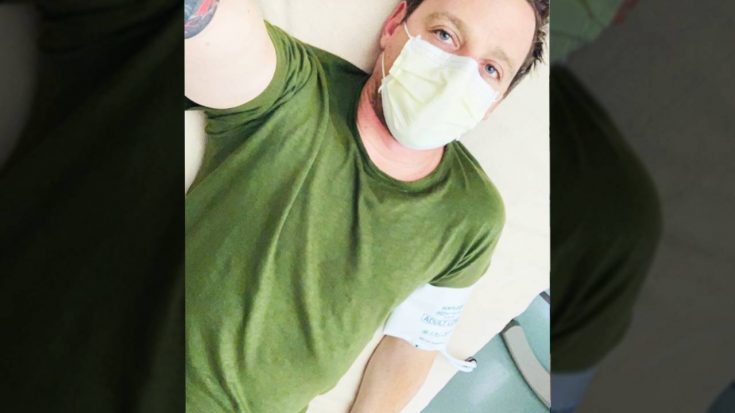 Grammy Award-winning country singer Sturgill Simpson has taken to social media to reveal that the COVID-19 test he took on Friday, April 6 came back with positive results.

Simpson has released two albums before signing to a major record label. After he signed with Atlantic Records, he released his third, and first major release, in 2016 titled Sailor’s Guide to Earth. That album went on to win him a Grammy Award for Best Country album in 2017.

In a recent Instagram post, Simpson shared his story of attempting to get a test for the novel coronavirus in March, when he first began showing symptoms.

“This photo was taken at 9am on March 13th when my wife took me to our local hospital ER due to chest pains, fever, and pre-stroke blood pressure levels,” he wrote.

He described how he and his band were on tour in Western Europe for two weeks in January and February, before returning stateside to tour a few more weeks. On March 12, two days after playing a show in South Carolina, he “pulled the plug” on his tour and headed home to quarantine like most of the rest of the country.

On March 13, Simpson said he had his wife take him to the local ER because he was experiencing “chest pains, fever, and pre-stroke blood pressure levels.”

The doctor he saw told him it was “impossible” that he had contracted the virus because of “its extreme rarity and that it was not in western Europe” at the time he was there. Simpson notes that we now know that is not true. He was the first person in that hospital to request a COVID-19 test, and was denied.

The next few weeks, he spent quarantined at home with his wife and his symptoms went away, but when drive-thru testing became available in early April, the Simpsons went to get tested. On April 10, he received a call saying he had tested positive “after almost one month without any symptoms.”

The musician’s wife tested negative and while there is so much uncertainty he wrote, “All I know is I first felt symptoms a month ago yet Im still positive and contagious and now on quarantine in the dojo until April 19th.”

His biggest regret? Not building a bathroom in his at-home dojo. He wrote about his story to shed some light on the shortage of tests available.

Ok since they are in short supply these days here are some facts… We were on tour in Western Europe for two weeks late Jan /early Feb..then up and down the southeast/eastern US playing arena shows mid Feb to early March. We played Charleston, SC on March 10 and they pulled the plug on our tour March 12 and I returned home. This photo was taken at 9am on March 13th when my wife took me to our local hospital ER due to chest pains, fever, and pre-stroke blood pressure levels. I spent an hour listening to a (highly condescending) Doctor refuse to test me because I “did not fit testing criteria” and tell me why it was impossible that I had contracted the virus due to its extreme rarity and that it was not in western Europe yet during that same period (which we now know is incorrect) even though I was told by two nurses that I was the first person their hospital had walk in requesting to be tested. Almost one month later on April 6th my wife and I were both tested after finally finding a free drive-thru testing facility outside a National Guard depot. Yesterday on Friday April 10th, after almost one month without any symptoms, I received a call from the Nashville CDC stating that my test resulted in a positive detection for Covid-19. My wife (who has been by my side since Europe) tested negative. I should also add that the CDC nurse I spoke to yesterday told me that it reacts differently in a case by case basis and the White House briefings and the information they are providing is basically pure speculation causing fear and that the only thing anybody knows is that we don’t really know much yet. All I know is I first felt symptoms a month ago yet Im still positive and contagious and now on quarantine in the dojo until April 19th and really wishing Id taken my wife’s advice and put a bathroom in the floor plans..live and learn. But hey, at least our Government appointed task force headed by a man who does not believe in science is against mass testing and we now have a second task force in the works to “open America back up for business”! Dick Daddy out.