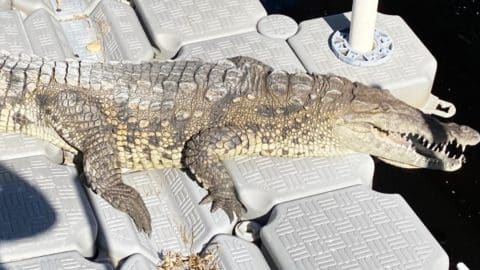 Crikey, mate! A Florida woman found a rare 70-year-old Crocodile in her backyard.

At first, Charlotte county native, Mona Vieregg, thought she was looking at an alligator, which is a far more common reptile in the Sunshine State. Crocodiles are considered an endangered species in Florida and typically do not venture past the state’s southern tip.

According to the Port Charlotte Sun, the Punta Gorda police arrived at the home and found the crocodile on Vieregg’s dock. The officers immediately contacted the Florida Fish and Wildlife Conservation Commission and reported that the reptile was 10 to 15 feet in length.

Tracy Hansen, a state alligator trapper, confirmed that the animal was one of the largest crocodiles that he had seen. Hansen also estimated the animal’s age to be about 70 years.

Vieregg explained that the neighbors had spotted the animal for weeks but misidentified the reptile as an alligator. While alligators and crocodiles are very similar, they can be easily told apart by their very distinct physical traits. Alligators usually have rounded snouts and are black, while a crocodile will have a tapered nose and appear more green or grey.

(Can you tell the difference?)

It is estimated that only 2,000 crocodiles now live in the state of Florida. You can learn more about American crocodiles in the video below.