By Miranda Raye on April 19, 2021
Advertisement 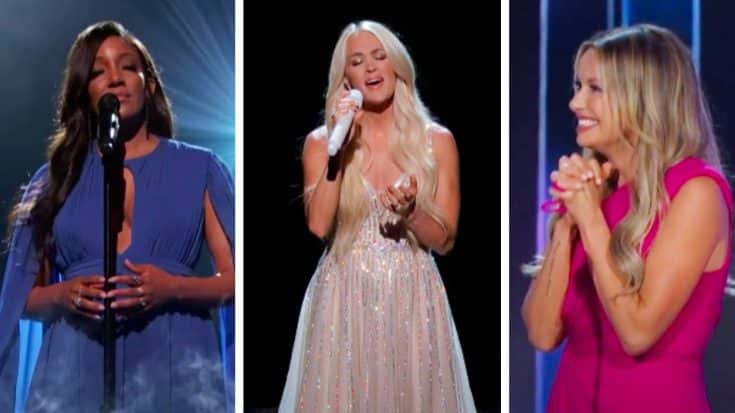 Country music’s biggest and brightest stars gathered in Nashville on Sunday night (April 18) t0 celebrate at the 2021 ACM Awards. In a time when live events are few and far between, the artists took the opportunity to dress to the nines.

Some artists opted to go the more elegant route with their attire, while others kept it causal. And some artists decided to don over-the-top ensembles that were fun and full of fringe (we’re looking at you, Miranda Lambert and Elle King!)

From the red carpet to the stage, country artists were serving up no shortage of good looks at the ACM Awards this year. Head below to see our list of ten of the best dressed singers at the ceremony.

.@carlypearce looking pretty in pink on the #ACMawards red carpet ? Catch her performance LIVE on @CBS & @paramountplus in 30 MINUTES! pic.twitter.com/eubUCbKBt5

Pearce took home not one, but two trophies from the ACM Awards. Both wins were for her song “I Hope You’re Happy Now” with Lee Brice. It won Music Event of the Year and Single of the Year.

Before, during, and after the ceremony, Pearce wore a stunning hot pink dress with an asymmetric neckline. The dress also featured a slit up one side and cinched at the waist.

To tie the whole look together, Pearce wrote high heels and lipstick that perfectly matched the color of her dress.

Lambert and King were tasked with opening the ACM Awards, so the two of them were some of the first artists to walk the red carpet. The besties wore matching leather jackets and black jumpsuits with rhinestone details.

King, who is expecting her first child with her fiancé Dan Tooker, joked she was feeling “tight” in her outfit.

She and Lambert rocked the same clothes for their opening performance, during which they sang their current hit duet, “Drunk (And I Don’t Wanna Go Home).” The long fringe on their jackets matched the tinsel backdrop displayed behind them on stage at the Grand Ole Opry House.

Tonight's the night! Kicking off the @ACMawards red carpet. ? @keithurban and I will be co-hosting the show, so watch it live at 8/7c on @CBS and @paramountplus. #ACMawards pic.twitter.com/CFqoSneJfQ

Guyton was a nominee, performer, and co-host at the 2021 ACM Awards! As a result, she had an extensive wardrobe and changed her outfit multiple times throughout the evening

One of our favorite looks was her red carpet dress, which was a beige color with sparkle details.

Another one of her standout pieces was the gown she wore for her performance of “Hold On.” The floor length, dark blue dress featured a cape on the back that gently flowed behind Guyton as she sang.

The Chief is in the building! ? Entertainer of the Year Nominee @ericchurch has arrived at the #ACMawards, dressed to impress! pic.twitter.com/CLcXqNhn6G

The ladies weren’t the only ones who got all dressed up for the ACM Awards this year!

Church was one of the artists who arrived in style. His dark red jacket was the centerpiece of his ensemble, which he accessorized with his signature sunglasses.

Fans got the chance to see “The Chief” and his jacket under the stage lights when he performed one of his newest songs, “Bunch of Nothing,” during the ceremony.

Thanks for hanging out with me during my live tweeting tonight!! Love all of you. I had the time of my life doing my first red carpet!! Thank you to the ACM Awards!!! #ACMawards @acmawards pic.twitter.com/YkXjXep0nl

New Female Artist of the Year nominee Tenille Arts was turning heads when she stepped onto the red carpet at the ACM Awards. She donned a light brown dress with a full length sleeve on one arm and an off the shoulder sleeve on the other.

The dress was accented with bronze-colored chains near the sleeves and along Arts’ torso. She completed the look with a few rings and a glittery black clutch.

We should be seeing Arts on many more red carpets in the future. Her current single, “Somebody Like That,” is a huge hit!

McBryde took the term “red carpet” literally when picking out her attire for the ACM Awards this year!

She rocked the red carpet in a long, deep red gown with a halter neckline. The sleeveless dress gave her the opportunity to show off her elaborate tattoos.

On top of being nominated for three awards, McBryde was also a performer. She wore a different outfit when she sang her fiery single “Martha Divine” later on in the night.

This time, McBryde opted to wear a black jumpsuit with sparkly gold details along the neckline and sleeves. It was a stunning outfit!

Shelton was celebrating the 20th anniversary of his debut single, “Austin,” at the ACM Awards. He proved that classic hits, and classic looks, never go out of style.

The Voice coach kept things simple with the attire he wore to the ceremony. He slipped on a pair of blue jeans, a blue collared shirt, and topped it all off with a darker blue jacket with pockets on both sides.

Shelton kept on the same outfit throughout the night, and wore it when he sang his anniversary performance of “Austin” alongside his current single, “Minimum Wage.”

Already a winner at this year's ceremony, Gabby Barrett has arrived at the 56th ACM Awards (press pics by Jon Morgan/CBS) https://t.co/Z1xUeEIg9G pic.twitter.com/tSaUILhoe4

Barrett not only won the New Female Artist of the Year award, but she won the style game at the ACM Awards.

She kept things casual with her red carpet outfit. She wore a pair of dark blue jeans which she paired with a cropped, sheer top with a floral pattern.

Later in the night, Barrett walked the red carpet in a different ensemble. This time she wore a black jumpsuit with silver details and a matching hat.

Barrett also wore a hat when she sang “The Good Ones” at the Bluebird Cafe. Her white hat complemented the white, ballooned sleeved top she wore with the jeans she had on earlier in the night.

Underwood didn’t make an appearance on the ACM Awards‘ red carpet, but she did make one powerful appearance to sing a gospel medley from the Ryman Auditourium.

Looking like an angel in a cream, floor length gown with silver sparkle accents, Underwood started her performance with “Amazing Grace.” She was later joined by gospel great CeCe Winans for a few songs before she closed the medley with a solo rendition of “How Great Thou Art.”

Underwood’s gown and performance earned a wealth of praise from those who tuned in to watch the ACM Awards, and it’s easy to see why.

We loved Underwood’s outfit and all of the others featured in this list. Whose look was your favorite?