By Miranda Raye on April 8, 2019
Advertisement 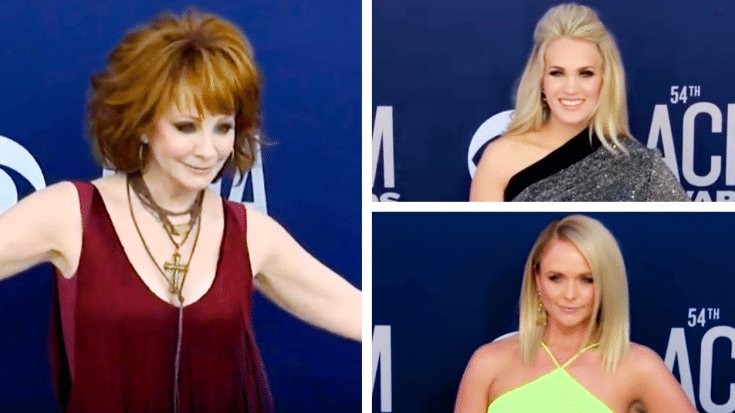 Once a year, country stars dress to the nines in order to walk the red carpet for the ACM Awards. The ceremony has taken place in Las Vegas for many years, and the stars’ outfits capture the glitz and glam vibe of the city.

It’s always so hard to pick the best-dressed country singers at the ACM Awards, because everyone ends up looking so good! But some ensembles definitely stand out, and we’re recognizing those looks in this list.

Sometimes, it’s not even the country singers themselves that steal the show, because their dates get all dressed up too. So we’re not just recognizing well-dressed country singers in this list…but their significant others as well!

Have we mentioned how nice you all look tonight? #ACMawards pic.twitter.com/91K5VySmm6

If you look below, you’ll find all the stars with looks that rocked the ACM Awards red carpet this year. Give the photos a glance, then let us know whose outfit you liked the best.

We can already guarantee that y’all will be in awe over Carrie Underwood and Luke Bryan!

New Male Artist of the Year @lukecombs and his stunning fiancé @nicohocking are here for a beautiful crazy night! #ACMawards

New Male Artist of the Year winner Luke Combs and his fiancée, Nicole Hocking, surely made a few heads turn when they walked the red carpet together at this year’s ACM Awards. The two are seasoned pros at dressing for awards shows by now, and they knocked it out of the park with this look!

Nicole opted for an elegant white dress with a twisted one-shoulder strap that she paired with glitzy shoes and jewelry as well as a red lip. Luke chose a dark gray suit with some tan boots that perfectly matched the pocket square he sported as his only accessory.

Such a good-looking couple!

Kelly Clarkson knows that sometimes, a classic look is the best look, and that’s the vibe she embraced with her ensemble for the 2019 ACM Awards.

The back-to-back winning Voice coach donned a long black gown with delicate floral lace details on the sleeve and across the chest. She took extra care to pull her hair into an updo so that none of the lace was covered.

Kelly’s red carpet date was also wearing a dress with floral detailing. She welcomed her winning Voice team member Chevel Shepherd to walk the red carpet with her, and she was as cute as could be in a red floral dress!

A few themes emerged from the outfits that appeared on the ACM Awards red carpet. As you can tell by now, black and white getups were a popular choice, just like the lovely dress performer Lauren Alaina wore.

Always a fan of making puns on social media, Lauren commented on her tiered black and white dress by saying that her night had “been pretty TIERrific” up to that point.

She noted how “obsessed” she was with her dress, which was also glittery and featured a black ribbon tie around the waist. But as much as we love her dress, it’s her houndstooth print clutch that we are truly “obsessed” with!

All that glitters is gold for @lukebryan! Tune in for his performance of “Knockin’ Boots” tonight on @cbstv!

Luke Bryan‘s ACM Awards attire was so vibrant, he had to wear shades!

The Entertainer of the Year nominee fully embraced the Vegas vibe with his ensemble, with the star piece being a patterned, metallic gold jacket. He also walked around wearing a matching pair of gold sunglasses, making him look like one of the coolest guys on the red carpet.

Luke later took to the stage to sing his new single “Knockin’ Boots,” and he sure was knocking our boots off with his stylish red carpet look!

These engaged stars lit up the room as soon as they arrived at the ACM Awards!

Carly Pearce took the term “red carpet” literally, choosing to dress up in a slimming red gown with a v-shaped neckline and a slit up the side. Her dress was accented with gold buttons around the waist and also along the sleeves.

As for her fiancé Michael Ray, he went for a timeless look, picking out a black suit with a white undershirt. He left the shirt unbuttoned a little bit, giving his look a more casual feeling without sacrificing all the formality.

Later in the night, Mickey Guyton took to the stage to join a number of other talented women to perform a song from the movie Breakthrough. But the singer experienced a breakthrough moment of her own on the red carpet, where she stunned with her princess-like ensemble.

The singer chose a jaw-dropping powder blue gown that featured an all-over lace detail with sheer sleeves and buttons up the back. She accented the look with some simple jewelry pieces and a patterned clutch featuring different shades of blue.

It was such a graceful look!

Usually best-dressed lists focus on the ladies and the fellas never seem to get the love they deserve. But no one could deny that Dustin Lynch was one of the best-dressed people there when he walked up!

Dustin made a bold choice with the color of his suit, opting for a copper tone as opposed to a traditional shade of black, gray, or blue. The unique color made him stand out, and also perfectly complemented his signature cream-colored cowboy hat.

Don’t be surprised if you see copper suits become more popular after this, because Dustin rocked this look!

Speaking of unique colors, Miranda Lambert fully embraced an uncommon color in her ACM Awards ensemble. She chose a dress that was a bright, vibrant green, and it looked outstanding on her!

But it wasn’t just Miranda’s dress that stood out. Her main accessory, an oval-shaped sparkly clutch, caught a lot of attention!

This was Miranda’s first red carpet appearance since she married husband Brendan McLoughlin during a surprise ceremony earlier this year. Brendan was on hand to accompany his wife to the awards, and he looked quite handsome!

Scotty McCreery was another fella who stood out thanks to his unique choice of attire.

The “In Between” singer balanced his look between formal and casual, choosing a tan-colored suit jack with black details to wear on top, and dark denim pants as his bottoms. He completed the look with a skinny black tie that stood out against his bright white undershirt.

But his best accessory was his beautiful wife Gabi. She looked so pretty!

Just two months after welcoming her second child, Carrie Underwood appeared on the ACM red carpet looking like an absolute bombshell. Although she wore many fabulous dresses throughout the night, her red carpet look was everyone’s favorite!

The Female Artist of the Year nominee looked downright gorgeous in her glittery black and silver dress, which featured a slit up both sides. She complemented the outfit with some smoky makeup and flowing curls, resulting in a fully orchestrated look that was simply breathtaking.

You can always count on Carrie to rock a red carpet!

Of course, one of the best-dressed people at the 2019 ACM Awards was the show’s host, Reba McEntire! The red-headed superstar had the most outfit changes out of anyone at the ceremony, but her red carpet look is the one that still has people raving.

Fully embracing the Vegas vibe, Reba went for a showgirl style by sporting a dress completely covered in fringe. Her whole dress shimmied whenever she twirled around!

If you think Reba looked fantastic on the red carpet, you’ll also love the glittery getup she wore to open the awards. Check out her opening monologue below so you can admire her look, as well as those of the other stars in the audience.

Who do you think was the best-dressed star at this year’s ACM Awards? There were so many good looks!