By Manly Bryant on August 19, 2020
Advertisement 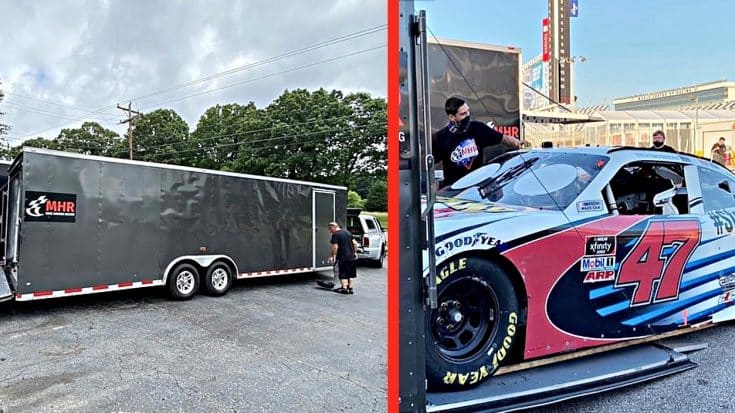 On Saturday, August 15th, 2020, the NASCAR Xfinity Series race was held at the Daytona International Speedway. Kyle Weatherman raced with car No.47 and finished the race in 17th place.

Kingsland Police Department reported Kyle’s car, trailer, and truck was stolen while his team was sleeping in hotel rooms after the race. The pickup truck was a 2000 silver Ford F350 and was parked in a Cracker Barrel parking lot next to the Super 8 hotel that they stopped at for the night. The police report was shared on NBC Sports.

The truck was seen on the surveillance camera leaving the parking lot at 5:55am on Sunday, just six hours after it was initially parked.

Mike Harmon Racing posted a reward offering $10,000 to whoever finds the vehicle, the trailer, and the race car. The value of the items in the trailer is worth $400,000, the police report said.

Thank you to our sponsors at Repairables.com, the REWARD is now $10,000 for the return of all the Mike Harmon Racing stolen equipment!!! STOLEN from Kingsland Georgia, spotted on surveillance cameras heading onto 95s towards Florida from exit 3 ANYONE with information, PLEASE contact the local authorizes IMMEDIATELY!!!

Kyle Weatherman posted a video thanking the NASCAR community for all their supportive messages and calls. Though it is a hard time for Mike Harmon Racing and himself, he says keeping a positive attitude and staying focused on the team’s goals is what matters.

The vehicles have still not been found as of Wednesday. They were last seen on I-95 South, on the way back toward Florida.

Thank you @NASCAR Community for the phone calls/text messages. Really hard time for @MhrRacing and myself but it won’t stop us from our goal. See everyone in @MonsterMile ?????? pic.twitter.com/doFy7wUW68