By Jennifer Pernicano on March 19, 2019
Advertisement 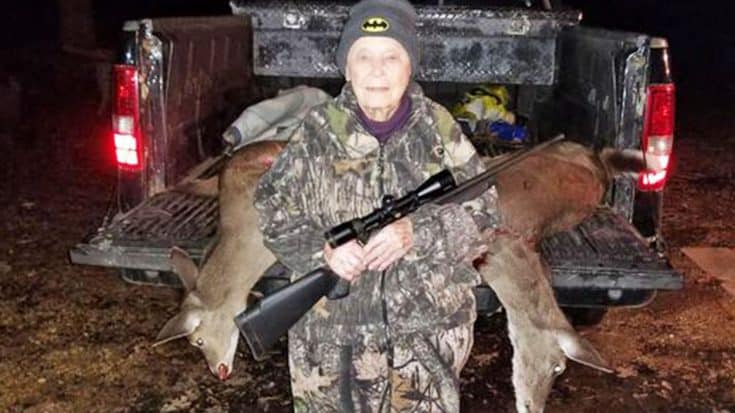 Even after 101 years, this little lady isn’t giving up her favorite hobby: hunting.

Bertha Vickers of Morgantown, Mississippi was celebrating over 10 decades on Earth when she got the ultimate hit. While laying low in the hunting blind that her relatives built for her, she waited for the perfect target. A couple of days prior, Vickers had been in a patch of bad luck as she couldn’t get the hit she hoped for. Nonetheless, Vickers was determined and it paid off.

Bertha Vickers is inspiring. Is there an age to stop hunting? We sure hope not! https://t.co/QqUIFCmU8p #hunting #deerhunting #puremichigan pic.twitter.com/FlKOpLzUEp

Sitting up in her blind, Vickers took a shot and it would soon become one of the most monumental in her career. Turns out, she had just hit not one but two deer with a single shot. Vickers told  The Clarion Ledger:

“Then I saw two deer on the ground. It shot plum through both of them. They both dropped right there. They didn’t take another step. I knew it was back there, but I didn’t realize it was that close to her where it could get shot.”

Following her big win, Vickers shared the meat with her family as she loves doing. Although admitting that she enjoys hunting for the sake of memories and enjoying the outdoors more than anything else.

To 100-Year-Old Bertha Vickers, bagging a deer is like another good day in the woods. She's got an amazing story. #treelounge #huntingforlifehttps://t.co/ihfcgr8cM8 pic.twitter.com/2gSY6mfHgE

Turns out, too that Vickers has been doing this for ages (literally)! In 2018, she was praised after harvesting a deer just a couple weeks before her 100th birthday. Of course, she hilariously reacted to the news – confused why everyone was so proud!

To this day, Vickers takes care of the daily house tasks all on her own. She mows her own lawn, cooks and grows vegetables. Aside from hunting, she enjoys fishing as well. Looks like this strong woman has no plans of slowing down!

Vickers has a positive way of looking at life after all these years,

“When you’re as old as I am, you naturally think each one could be your last one, but I’m going to go as long as I can,” Vickers said. “I enjoy it. I love being outside.”