By Manly Bryant on June 3, 2020
Advertisement 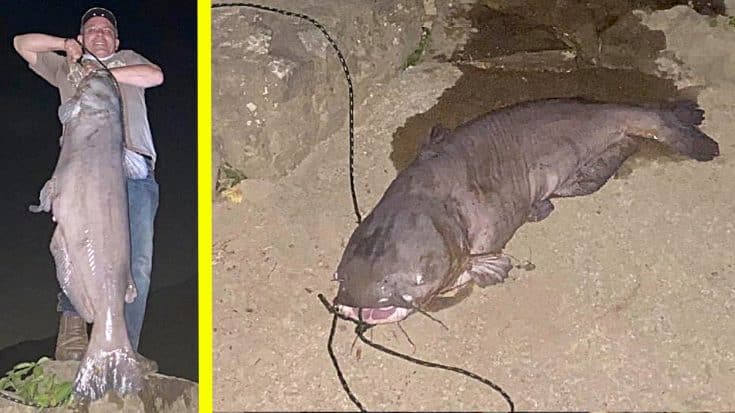 David Anderson was casting his fishing line into the Nolichucky Reservoir located in Suck Creek, Tennessee on Saturday night when he reeled in a near state record-breaking 103-pound blue catfish.

The current state record is a 112-pound fish caught by Robert E. Lewis on the Cumberland River in 1998. David’s from Hamilton County and said he didn’t have to work on Sunday so he showed up to the reservoir around 9:00pm. He invited his friends but none of them wanted to come. He says he wishes his friends would have been there to watch him reel it in.

“Fishing is more than catching for me,” David told the Tennessee Wildlife Resources Agency (TWRA). “It’s my church. It’s my go-to place. It’s my get-away, where I gather my thoughts.”

Equipped with a 7-medium action, Shakespeare Fishing rod that had a Quantum Fishing HD 40 spinning reel holding a 12-pound Berkley Fishing monofilament line, he was able to entice this fish with a number 2, octopus circle hook, baited with a nightcrawler.

He said his pole was logged in the rocks when he hooked the catfish around 11:45pm. David said that the pole didn’t bump or tug, but literally was jerked out of the rocks. He grabbed it, leaned back, and let the drag out. It took him a whole hour of battling the fish before he was able to finally pull it to shallow water. At this point, he tried to scoop the fish with a net but the net broke.

“It was like I was walking a dog and then it would walk me! I was not going to let this fish get away after the fight and I gathered both net and fish and took them to the bank,” David said.

Check Out The Offical TWRA Report Below

IT’S MORE THAN JUST A BIG FISH David Anderson set out to fish this past Saturday, knowing he didn’t have to work the…