By Manly Bryant on December 3, 2019
Advertisement 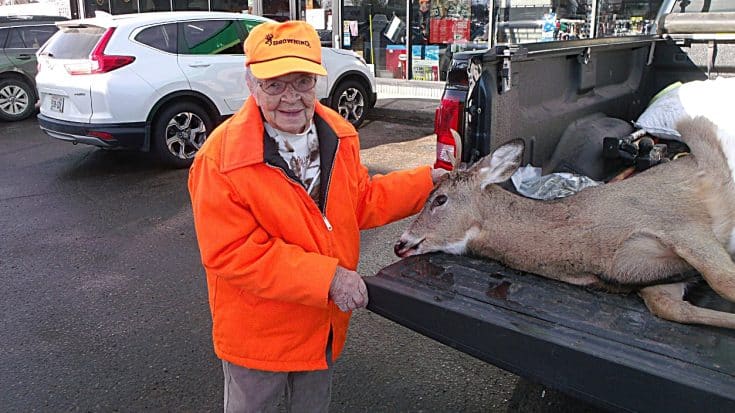 Hunting For The First Time At Age 104

In Price Country, Wisconsin, 104-year-old Florence Teeters decided to get her hunting license for the first time and participate in the “gun deer season” with her family.

“Yes, it was her idea to get the license — and, yes, that was her first license,” her son Bill Teeters told Wisconsin Department of Natural Resources.

Florence did it all by herself too. She bundled up for the cold, grabbed her walker and got someone to give her a ride down to the local gas station where they sold licenses for deer hunters.

DNR conservation warden Joe Paul was there and thought it was fantastic to see her getting her license for the first time and preparing for the nine-day deer season. He and his partner Nick Hefter excitedly posed for a picture with her.

Going On The Hunt With Her Son

On the first day of the season, her son Bill setup a cozy deer blind that had a comfortable seat for her to sit and wait for a deer. The waited, watched and talked to each other about the family.

About two hours into the hunt Bill saw a buck. He tapped Mrs. Teeters on the leg and pointed to where the buck was standing. Her eyes lit up and she smiled when she zoomed her scope onto the buck. When the deer got into the perfect position she took her shot and got him.

Oldest Person To Get A License To Hunt Deer

Getting her first buck at age 104 was an amazing accomplishment that has likely inspired other first-timers or elderly folk to get into the hunt and give it a shot.

What’s even cooler is if you look into the Department of Natural Resources Go Wild database, Florence is the oldest person to ever purchase a license to hunt deer and on top of that kill a buck on her first hunt.

Florence Teeters is 100% that deer hunter. This mother of five got her first buck on her first hunting trip ever this…

Posted by Wisconsin Department of Natural Resources on Tuesday, November 26, 2019