By Manly Bryant on February 1, 2021
Advertisement 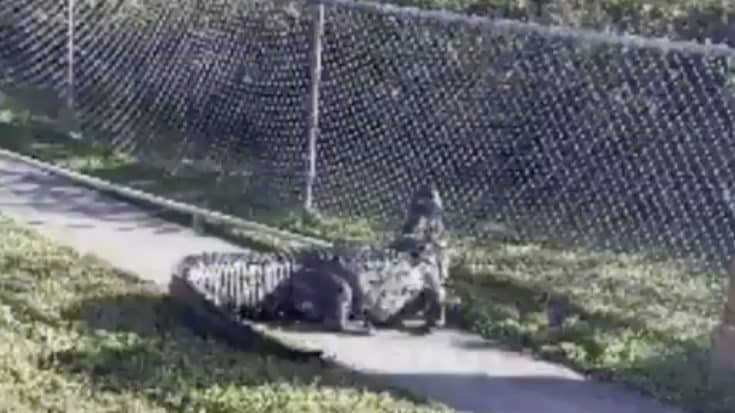 According to the Polk County Sheriff’s Office, a 10ft, 800lb alligator had to be subdued and removed from sunbathing near a middle school in Lakeland, Florida.

Polk County Sheriff’s Office got two calls about the gator around 7:40 in the morning after a few concerned parents spotted it sunbathing on a sidewalk beside a fence on Scott Lake Road and Fitzgerald Road.

Parents were concerned for their children’s safety because their kids use that path along the west shore of Scott Lake to walk to Lakeland Highlands Middle School and that gator was a carnivorous monster standing in their way.

Animal trapper Doug Payne was called to remove the gator but it wasn’t easy. Video shared by the sheriff’s office shows the gator hissing and thrashing around after the trapper put a noose around its neck to remove it. The animal did not want to be bothered basking in its warm spot.

Wildlife officials say in the wintertime when the weather is a lot colder in Florida, the gators like to get out of the water and sunbathe trying to warm their cold-blooded bodies. For this specific gator, the concrete sidewalk looked like a nice place to catch some sun rays.

@PolkCoSheriff Deputies met this dude on a Lakeland sidewalk Thursday. 10ft long, 800lbs. A trapper had to come get him from the residential/school area. Video is by D/S Ashtin Mosley. And no, she won’t be sporting a new belt and boots next week. pic.twitter.com/YrVT52qwZd

Because the reptile was classified as a “nuisance alligator,” Doug transported it to a processing place where it will be harvested for its meat and hide.

Deputy Ashtin Mosley, who recorded the video of the gator, added “And no, she won’t be sporting a new belt and boots next week.”