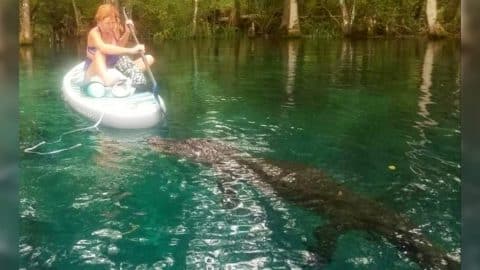 Vicki Baker was paddleboarding at Silver Springs State Park in Ocala, Florida when she had a scary close encounter with a 10-foot alligator and it was all captured on video.

“He came after me and tried to bite my paddleboard,” Vicki Baker said in the video.

She was with a group of friends who were kayaking who took pictures of the gator as it approached Vicki’s paddleboard. Vicki was also filming the gator as it swam up to her very calmly as if it was familiar with interacting with humans.

“This gator comes out of nowhere and it comes in between the two kayaks and straight for my paddleboard and then he opened his mouth and almost bit my paddleboard,” Vicki said, according to Click Orlando.

Vicki spoke to the gator telling it to get back but it kept getting closer and she ultimately had to gently put her paddle on the gator’s back to push it away.

After pushing the gator back, it hissed at her and you can hear a man’s voice in the bacground say, “Ma’am, I would suggest backing up considering you just made him pretty mad.”

Gators don’t normally approach humans like this unless they’ve been taught that they can get food from them.

“I panicked. If you listen to my voice it was very shaky. I know people think I was really calm but I wasn’t,” she said. “I had to get it away from me. I didn’t have a choice you know. I was defending myself and I didn’t smack it on the head, I didn’t try to hurt it, I just wanted it to go away.”

She shared the video on Facebook and since then it’s been shared almost 8,000 times.

She said she immediately showed the video to a park ranger and told them she is scared that the gator is going to hurt someone. They told her not to worry about it, that they will take care of it.