11 Country Songs That Were Considered Controversial

By Miranda Raye on March 20, 2019
Advertisement 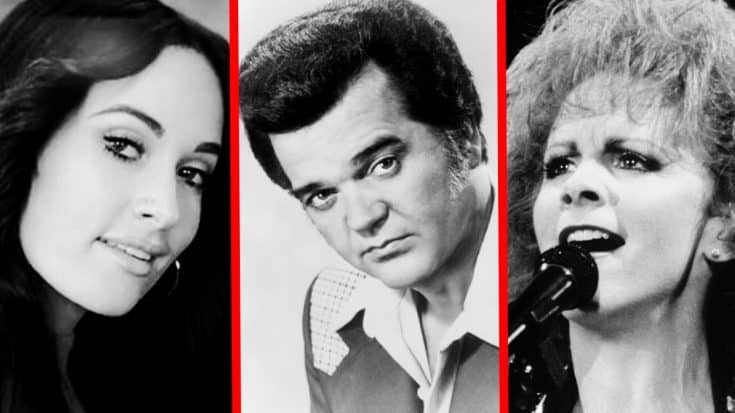 The Controversial Songs Of Country Music’s Past

Not everyone loves every country song ever released. That goes without saying.

But in the past, some country songs have gotten fans and industry leaders so upset that they have been shunned, ignored, and sometimes, flat-out banned.

Most of these songs sparked controversies because of their subject matter, with fans and industry members deeming them too violent or promiscuous for conservative country radio. Others found themselves banned over the use of just a word or two that was deemed “inappropriate” for young ears to hear. And a few songs were fine with fans until they saw their music videos, and then the outrage poured in.

Kitty Wells born this day, 1919, Nashville, Tennessee. Here doing “It Wasn’t God Who Made Honky Tonk Angels,” on Grand Ole Opry, 1952. The answer song to Hank Thompson’s “Wild Side of Life,” it was the 1st number one country hit by a woman, though controversial & banned at first. pic.twitter.com/psjcbVpUrN

There are more controversial songs in country music’s past than you likely ever realized.

In fact, some of the genre’s most heavily criticized tracks are now considered some of the biggest and best hits in the genre’s history. The passage of time has been kind to these songs, but their contemporaries certainly weren’t.

Want to know which country songs found themselves in hot water? Then check out our list below…

Loretta Lynn was never afraid to speak her mind and push boundaries in her songs, which is why this isn’t the only time you’ll see her mentioned on this list.

The 1972 single addressed the criticism that divorced women faced at the time. That was a strike against Lynn at country radio, made even worse by the fact that she didn’t sugarcoat her feelings in the song.

Despite the fact that some radio programmers refused to promote the song, it still reached and resonated with a large number of listeners. It ended up becoming Lynn’s sixth number one hit.

“You’ve Never Been This Far Before” By Conway Twitty

Lynn’s duet partner Conway Twitty experienced a scandal of his own because of his 1973 single “You’ve Never Been This Far Before.” While the suggestive tune left many a country girl feeling weak in the knees when they heard it, other listeners weren’t as impressed.

Many radio programmers deemed the song too risqué to play, and so it was banned from many stations. That didn’t stop it from catching on, and it became a number one country hit in both the U.S. and Canada.

To top it all off, the song was a major crossover success, climbing as high as the 22nd spot on the all-genre Billboard Hot 100.

“The Pill” By Loretta Lynn

By the age of 32, Lynn was already a mother to six children. So it stands to reason why she decided to write and record a song titled “The Pill,” which addresses the relief a married woman feels after starting birth control. As Lynn sings in the song, the wife was getting tired of having babies year after year, and the pill finally gave her some freedom.

However, the folks at country radio took her song the wrong way. Instead of seeing it as a message about giving married women the ability to control the size of their families, many felt that Lynn was advocating the pill to promote sexual freedom and promiscuity.

The song was released in 1975, just three years after “Rated ‘X'” caused its own controversy. But programmers were even harder on “The Pill,” with far more people refusing to play it. As a result, it only climbed as high as the fifth spot on the country chart. But the song got enough attention to push it up the pop chart, making it the highest-charting pop single of Lynn’s entire career.

Radio programmers and listeners had more than one reason to shun Kacey Musgraves‘ 2013 single “Follow Your Arrow.” The song, which was co-written by Musgraves, encourages listeners to follow their dreams and chase their own paths in life, no matter who may be looking down on them or trying to tell them otherwise.

Ironically enough, the song experienced a great deal of backlash because it was trying to follow a different pattern than other country radio hits of the past. The main source of controversy stemmed from lines in which Musgraves sings “Make lots of noise. Kiss lots of boys. Or kiss lots of girls, if that’s something you’re into,” and the mention of rolling up a “joint.”

Overall, the song was too controversial to ever gain serious traction on country radio, though it did climb as high as the tenth spot on the Hot Country Songs chart. Despite its negative stigma, the CMA named it as the recipient of the Song of the Year award at its 2014 ceremony.

Little Big Town‘s Grammy-winning song from 2014 sparked a controversy all because of a misunderstanding. The song places Karen Fairchild in the lead, and his her singing about how much she obsesses over “the other woman” who gets to love and kiss the man she adores.

Seems pretty straightforward, right? Well, not to some listeners, who heard lines such as “I want to taste her lips, yeah, ’cause they taste like you,” and took them literally, as if Fairchild was saying she was in love with another woman.

But while the confusion around some of these lines resulted in some pushback against the song, the ones who “got it” threw their full support behind it. The track became a major hit, and won a number of other awards in addition to two Grammys.

“Okie From Muskogee” By Merle Haggard

Now we know what you’re thinking, how in the world could one of country music’s most iconic songs also be one of its most controversial? Is it because it mentions alcohol? Or because it says the word “marijuana?”

Nope, none of the above. It turns out that Merle Haggard‘s signature song caused a lot of controversy because it presented a point of view that didn’t jive with a lot of people at the time.

The song was released in 1969, a time when protests against the Vietnam War were in full swing. Throughout the song, Haggard seems to be dismissing such protestors and the “hippies” that emerged at the time, mentioning how the people of Muskogee don’t burn their draft cards or do drugs.

Seen as a strictly conservative song, more liberally minded folks pushed back against Haggard’s message. But years later in 2010, he told The Boot that he never meant for it to be a liberal critique, but rather, a show of support for the troops.

That message didn’t come across to all who listened to the song, hence the reason why it stirred up some controversy back in the day.

Kid Rock‘s crossover into country music was a stunning success. His 2002 single “Picture” featured Sheryl Crow on guest vocals, and reached the 21st spot on the Hot Country Songs chart. It also crossed over to the pop chart, where it peaked at the fifth position.

While the song didn’t experience as much backlash as some of the other tracks listed here, it did contain a word that likely left some radio programmers hesitant to play it. Yes, you read that right, “Picture” was a controversial song all because of one word….”cocaine.”

The country music industry has famously shown hesitation toward songs that mention drugs, such as “Follow Your Arrow” as we mentioned earlier and other tracks like Johnny Cash‘s “Sunday Morning Coming Down.”

But rather than ban “Picture” entirely because of the one taboo word, country radio just bleeped it out to avoid any major backlash from listeners.

“Goodbye Earl” By The Dixie Chicks

The song in question was “Goodbye Earl,” a tale about two best friends who reunite to get rid of one woman’s abusive husband, Earl. It is revealed that the two women poison Earl’s food, then later wrap him up in a tarp and stuff him in the trunk.

After reading that summary, it’s not hard to see why the song found itself in some hot water following its release. Many just couldn’t get behind the track, feeling it felt wrong to celebrate the act of murder no matter what the circumstances were.

Despite the negative feelings some had for the song, it went on to become a Top 20 country hit.

“The Thunder Rolls” By Garth Brooks

What sparked the controversy behind this iconic Garth Brooks hit? The answer is that a couple of things are to blame, with one of the reasons stemming from the other.

Unless you have a copy of Brooks’ Double Live album or have seen him in concert, you’ve likely never heard the words that caused people to lash out at “The Thunder Rolls.” That’s because the song has an additional verse that Brooks only plays live, likely because of the controversy it caused.

This verse describes how the wife in the song goes to find a gun after finding out her husband has been unfaithful to her. It’s implied that the woman intends to kill her husband, which, as you’ve learned, the subject of murder doesn’t sit well with radio programmers.

So Brooks avoided some criticism by ditching the verse for its radio release. But the song came under fire again after he released the music video, in which he did not sing but referenced the fourth verse by implying that the wife was a victim of domestic violence at the hands of her husband.

This didn’t sit well with TNN or CMT, who banned the video and did not play it. Still, it went on to win the CMA Award for Video of the Year.

“I Melt” By Rascal Flatts

If you’re trying to remember the lyrics to this Rascal Flatts song in search of anything controversial, you won’t find anything alarming. In this case, it wasn’t the song itself that led to an outcry, but its music video.

And all because of something that appeared on screen for a split second.

The video, which was released to accompany the single in 2003, briefly showed the bare backside of member Joe Don Rooney and also a scene in which a model playing his love interest was showering.

This made the video the first in country music history to ever feature nudity, and as you would it expect, it didn’t go over well. GAC yanked the clip from the air when the trio refused to send in an edited version.

However, CMT continued to air the video, and it went on to top the network’s Top 20 Countdown for the week of October 2, 2003.

Here’s a song that sparked controversy not once, but twice. First, when the songwriter Bobbie Gentry released her original rendition in 1969, and again when Reba McEntire debuted her cover in 1991.

By now, you can probably understand why a song about a mama who sends her daughter off to become a prostitute didn’t sit well with country audiences or people in the industry. You can also understand why Gentry’s recording was considered more controversial at the time than McEntire’s rendition was.

Although McEntire’s recording still fell subject to the same critique as Gentry’s, the times had changed and people had a better understanding of the context. Today, those who listen to “Fancy” understand the song even more than they did back then, and memories of its controversial past have faded.

Such is the case for a number of the songs that appear on this list. Tracks that were deemed shocking or inappropriate for their era seem tame when viewed under a modern lens.

And today, some of those same songs that people once tried to hide are now the ones that have been enjoyed by generations.