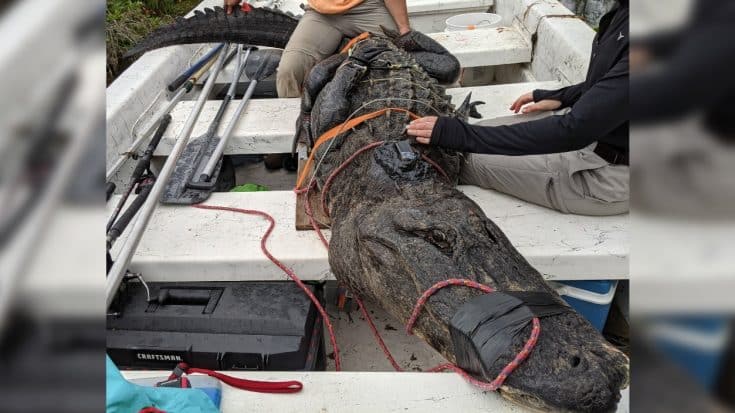 Coastal Ecology Lab put together an alligator project, which is studying everything from their courtship habits to how far they travel and has found an alligator that looks scarier than the rest – his name is Doc.

“Doc was named after two very special people and founders in the Swamp’s history. The first is Dr. Wilbur Hafford, the founder of the Okefenokee Swamp Park and the second is Dr. William Clark, the current chairman of the board of trustees at OSP and the man who brought us to the swamp to conduct research on the American Alligator,” Coastal Ecology Lab wrote on Facebook.

The research team found the one-eyed, snaggle-toothed alligator to be about 11 feet long, 375 pounds and covered in battle scars. The gator was spotted in the Mud Lake area of Okefenokee Swamp Park as the team was surveying the area. You can tell he’s been through a lot.

“Doc seems to have been around for a while. This is evident by his numerous misshapen and worn scutes (bony scales), as well as old injuries that have healed. Doc is missing part of the left front of his snout and has one snaggle tooth that sticks straight out of his upper jaw. He also is missing his left eye,” Coastal Ecology Lab said.

The team has 11 gators tagged that they are tracking and studying and Doc has officially become the 12th. They tagged and measured Doc to be the third-largest alligator in their project. He is past his prime, but he’s definitely a survivor.

“Despite his injuries and old age, Doc still has some fight in him as he rightfully growled and hissed at us while we were capturing him. He is very possibly the dominant male in this stretch of the swamp,” the lab wrote.

When they went to approach him, the team said they used his blindness in one eye to get close to him. After they were finished tagging Doc, they let him go and will be monitoring him over the next few months.