By Miranda Raye on August 23, 2019
Advertisement 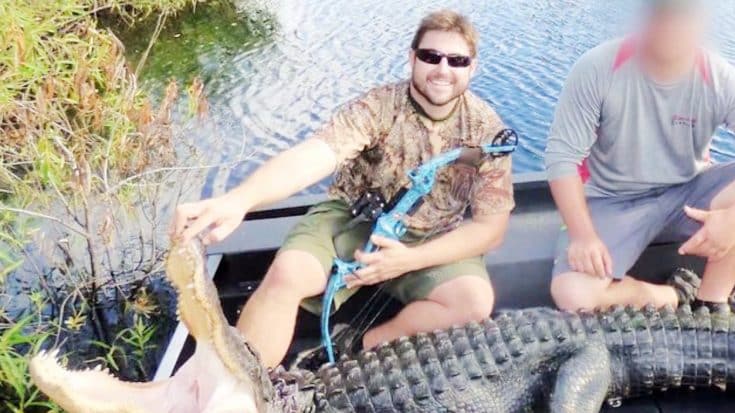 One of Justin Perchalski’s favorite pastimes was alligator hunting, which is legal in Florida. The alligator hunting season started on Thursday (August 22) and will last until November 1 this year.

But one horrific experience will likely keep Justin from ever going gator hunting again.

Justin was in Three Forks Marsh near Palm Bay with three other people when they finally caught a gator. His brother, Ryan, spoke with FOX 26 News about what happened next.

“Justin reached over the side of the boat to pull on the line, to bring the gator up, when the gator came out of the water, grabbing his right hand,” Ryan said.

Justin’s friends held on to him during the attack, and managed to keep him in the boat. The gator, which was estimated to be 11 feet in length, latched on to Justin’s hand and made a turn and a half before it finally let go.

An alligator hunter was looking to catch his next ferocious beast, but instead of snagging an 11-foot gator, the gator was almost the kiss of death. #FOX35https://t.co/ioU7nSARxx

After the gator got away, Justin took off his belt and used that as a tourniquet to stop the bleeding. He then drove the boat back to the dock himself, since the other people he was with were unfamiliar with the area.

Justin is now recovering at the Orlando Regional Medical Center following surgery. His brother Ryan says the gator turned his bones “to mush” and that “one of his radial bones in his forearm is gone.”

Despite all of this, Justin is doing well after surgery, and is up and walking around.

You can learn more about Justin’s horrific alligator encounter and how he’s recovering by tuning in to the video below. We’ll be praying for him to get well soon.