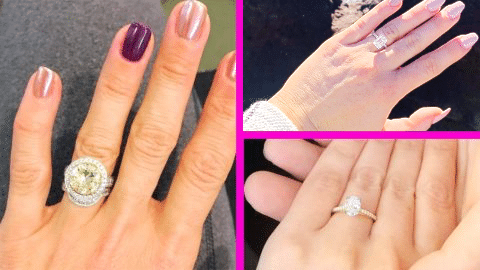 The first step toward saying “I do” is having someone say “yes” to a proposal. Because of this, it’s no wonder why people make such a big deal out of engagements, especially when those engagements occur between celebrities.

One of the first things fans want to see after an engagement is announced is a photo of the ring. And rightfully so, since country stars and their spouses can often afford elaborate, unique sparklers.

Many country singers and country singers’ significant others are currently rocking some stunning engagement rings. It’s hard to pick favorites, since all of them are beautiful, but we’ve taken the time to showcase some of the most dazzling rings in this list.

From LeAnn Rimes‘ oval-shaped solitaire with a delicate band, to Carrie Underwood‘s standout yellow diamond, the engagement rings in this list are sure to take your breath away! Check them out below.

The “Miss Me More” singer announced her engagement to fellow country star Morgan Evans on Christmas Day in 2016. She shared a singular photo from that day, which shows her flaunting her then brand-new ring.

Now married, Kelsea is still head over heels in love with Morgan and her engagement ring. You can see the ring well in the closeup photo above. We love the all-diamond band!

Hey 36, welcome! Reflecting, but not looking back! Italy 🇮🇹 you have my heart ♥️ and my stomach 😝 I couldn’t dream up a better day! #happybirthdaytome #36 #italy #lakecomo 📸 @eddiecibrian

Like Kelsea, LeAnn Rimes also got engaged in December, though her engagement occurred six years prior in 2010. Her now-husband Eddie Cibrian gave her this gorgeous ring, which features an oval-shaped solitaire diamond and a delicate rose gold band.

You can see LeAnn showcasing her ring in the above photo taken during a trip to Italy. If you’d like a closer look, check out this clip she shared on her Instagram. It’s a bit blurry, bit it still captures the beauty of her ring!

Maren Morris‘ engagement ring from her husband and fellow country singer Ryan Hurd may be one of the most unique sparklers on this list!

The couple announced their engagement on July 9, 2017.

Ryan had the ring custom-made, and chose an uncut diamond as the featured stone. “I couldn’t just buy something. I had to make it something that fit her,” Ryan told Entertainment Tonight.

We’d say he succeeded, because it seems like Maren loves her ring!

Jana Kramer and her husband Michael Caussin have been through their fair share of trials through the years. But they’ve proven that their love is just as strong as the diamond she rocks on her ring finger!

Jana and Michael got engaged in December 2014 after Michael popped the question on Jana’s 31st birthday.

You can clearly see Jana’s engagement ring in several of her Instagram photos, like the above picture she took with her and Michael’s son, Jace. That is one huge diamond!

Now that I’ve had time to let it sink in a little.. I always said if I was to ever get married, I didn’t want to pick out the ring or go ring shopping. I wanted it to be something that when he saw it, he knew that it was the one.. & boyyyyyy did he out do himself. I never thought a ring could mean so much to me. I love you Luke Albert Combs, I’m going to marry the hell outta you ♥️♥️♥️

Country superstar Luke Combs surprised his girlfriend Nicole Hocking with this jaw-dropping diamond ring when he popped the question in November 2018. The large, emerald-shaped stone stands out on the platinum band, which is covered with smaller stones.

While showcasing the ring immediately after the engagement, Nicole bragged about how well Luke had done picking it out. “boyyyyyy did he out do himself. I never thought a ring could mean so much to me,” she wrote.

It’s a beautiful ring, that’s for sure!

DREAM guy, DREAM story, DREAM everything. Pretty cool to have @people capture our story ❤️ link in bio on how it all went down… I actually found out stuff I didn’t even know beforehand! 😆 @chuckwicks

This blond beauty shares ties to country music through both her brother and her new husband. You see, Kasi’s maiden name was Williams, which is the true last name of megastar Jason Aldean. They’re brother and sister!

But now, Kasi’s last name is Wicks, and that’s because she married “Stealing Cinderella” singer Chuck Wicks. The two got engaged in March 2019 and tied the knot in Cabo in July 2019.

People covered the couple’s engagement and Kasi shared the above photo of her ring with the publication. It features an oval-shaped center stone and an all-diamond band, ensuring that it will sparkle from every angle!

A lot has happened since Brett Young asked his longtime love Taylor Mills to marry him in February 2018. The couple wed just a few months later, and by April 2019, they shared they were expecting their first child.

While a lot has changed for the Youngs in a short amount of time, Taylor’s gorgeous diamond engagement ring has remained a constant. If you scroll through the above slideshow the couple shared with People following their engagement, you can see one closeup photo that wonderfully showcases the beauty of Taylor’s ring.

Today was a dream 💞💗💕 I SAID YES!!! Can't wait to spend the rest of my life with you eeeek 😊🤗👏🏼 #I'mafeyoncé #bestfamilyever #soinloveeee

Scotty McCreery hiked to the top of a North Carolina mountain to surprise his high school sweetheart Gabi Dugal with this dazzling piece of jewelry when he proposed in September 2017. Just check out the second picture in the above slideshow to admire it!

The couple married in the summer of 2018. While many of the other stars on this list can be seen flaunting rings in white gold or platinum, Mrs. McCreery’s oval-shaped stone is set on a yellow gold band which is covered with smaller diamonds.

It’s a breathtaking ring, that’s for sure!

Peace and blessings 2018!!! Not sure what 2019 has in store…but with this family…it will be interesting! #dysfunctionjunction

It would be real hard for y’all to miss Caroline Bryan’s engagement ring…because it’s huge!

Luke Bryan clearly knows how to treat a lady right, because he gave his wife one showstopper of a ring. You can see it pretty well in the picture above, but just in case you want another look, check out this red carpet photo of Caroline and Luke.

Unlike other country stars who announce their engagements on social media, Kane Brown shared news of his engagement during a show in April 2017. He and his now-wife, Katelyn, married in October 2018.

The beautiful Katelyn gets the opportunity to rock a beautiful engagement ring, which you can see in the romantic photo of her and Kane above.

She also showcased the ring in a photo taken shortly after her marriage, which shows her wearing a swimsuit that reads Mrs. Brown. See that photo here!

Hey @kramergirl it took me a couple of days to get my nails done, but I'm happy to join in the #PutTheNailInIt movement to help bring awareness to domestic violence. Thanks for helping so many women by sharing your story. ❤️️ ya'! Nails by @jent41mua

Out of all of the stars on this list, Carrie Underwood is the only one to rock an engagement ring with a colored diamond.

Her husband, Mike Fisher, proposed with a gorgeous ring that features a round yellow diamond as the centerpiece. It is then surrounded by a halo of white diamonds and the band is covered in diamonds as well.

An article published by The Knot cites The International Gem Society, which says that Carrie’s center diamond is five carats, and the ring contains an additional seven carats of diamonds. Get another look at her massive sparkler by checking out this photo.

As one of the most unique and therefore most well-known country singer engagement rings, we just had to include Carrie’s ring on this list!

Out of all of the rings that appear on this list, which one is your favorite? They’re all glamorous, so it’s hard for us to choose!