By Miranda Raye on June 8, 2022
Advertisement 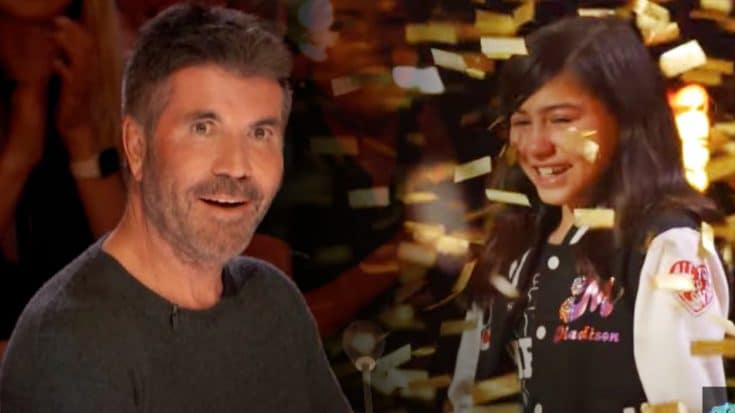 11-year-old Madison “Maddie” Taylor Baez is a huge fan of America’s Got Talent. So she was understandably thrilled when she got the chance to attend a taping of the show as a member of the audience.

But Baez ended up being far more than an audience member. Before the show, a mic was passed through the crowd so people could showcase their talents. The mic eventually made its way to Baez, and she sang “Amazing Grace.”

Her voice stood out to Simon Cowell, who wanted Baez to officially audition for the show. So she was taken out of the audience and led up to the stage.

With tears streaming down her face, Baez paused for a moment before she started singing. She performed “Amazing Grace” once more, with no backing track as support.

A post shared by America’s Got Talent – AGT (@agt)

Baez left the judges in awe over her powerful performance. They showered her with praise, and Howie Mandel asked what she’d do if she won the show and received the million dollar prize.

With tears streaming down her face, Baez shared that her dad has been battling cancer for nine years, and it has reached stage four. So if she won the million dollar prize, she’d use the money to help him.

Mandel turned to his fellow judges and said, “We should just vote.” The audience seemed to catch on to what was about to happen, because they began chanting “golden buzzer.”

As the crowd rose to its feet, Mandel stepped forward and pressed the golden buzzer for Baez.

Each judge gets the chance to press the golden buzzer once during the auditions. Acts who receive a golden buzzer automatically advance to a later stage of the competition.

Baez cried as gold confetti rained down on the stage. Mandel rushed up there to hug her and said, “You’re amazing!”

Baez had her dad come up on stage to join her in the celebratory moment. He revealed that his daughter learned to sing by performing for him at the hospital as he underwent various surgeries and treatments.

You can meet Baez and witness her emotional performance in the video below. Congratulations to her on receiving the golden buzzer!