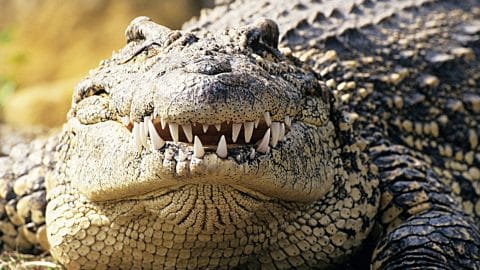 Girl Saves Her Friend From Crocodile

According to a local news report in Zimbabwe, an 11-year-old girl jumped onto a crocodile that was attacking her 9-year-old friend and gouged its eyes out, saving her life.

Brave girl (11) jumps into stream, wrestles crocodile to save friendIN a rare show of bravado, an 11-year-old girl…

The Story Of How It Happened

Rebecca Munkombwe and a group of friends were swimming in a river when they heard their school-mate Latoya Muwani screaming. As the group went over to see what was going on they noticed Latoya struggling to keep her head above the neck-deep water and was being pulled away by something.

Being the oldest in the group Rebecca felt obligated to help her so she heroically jumped into the water, swam over to her friend, saw it was a crocodile that had her friend by the leg and instead of running away she mounted its back.

“We had just left the water when we heard Latoya who was left alone swimming near the neck deep zone screaming that something was biting her hand. Since I was the eldest among the other seven children, I felt the urge to save her. So, I jumped into the water and swam to where she was struggling to float. She was screaming in pain that something was biting and pulling her under,” Rebecca said according to Sunday News.

DRAMA IN REAL LIFE. A school girl,11, wrestled a large crocodile, jumping on its back and gouging its eyes out to save…

Rebecca hit the croc but it wouldn’t let go until she gouged both its eyes out and it finally loosened its grip on Latoya. Rebecca then grabbed her friend and quickly swam towards the shore where she was met by the other group of girls who helped get Latoya to a nearby hospital.

“I jumped on top of the crocodile and started beating it with my bare hands before using my fingers to poke its eyes until it released her. Once she was free, I swam with her to the banks where the other children pulled her out of the water. The crocodile fortunately did not attack us after it let off Latoya,” Rebecca said according to Sunday News.

Latoya’s dad, Fortune Muwani, who was at work when it happened was called and told his daughter was attacked by a crocodile. At first, he feared the worse, thinking she was dead or seriously injured but later found out from a nurse that she received only “mild injuries.”

“I was at work when I learnt that my daughter had been attacked by a crocodile while swimming. For a moment there I thought of the worst before I learnt that she had survived after being saved by Rebecca. How she managed to do that I don’t know but am grateful to God. Latoya is recovering well here at St Patrick’s and we expect her to be discharged soon as her injuries are not serious,” Mr Muwani said according to Sunday News.

Fortunately, Latoya survived and is expected to make a full recovery. Meanwhile, everyone celebrated Rebecca for her heroic act and bravery.

An 11-year-old girl in Zimbabwe jumped on top of a crocodile and gouged its eyes out when it attacked her 9-year-old friend. Click here for the full story ➡️ http://bit.ly/croc-attack-zimbabwe ⬅️