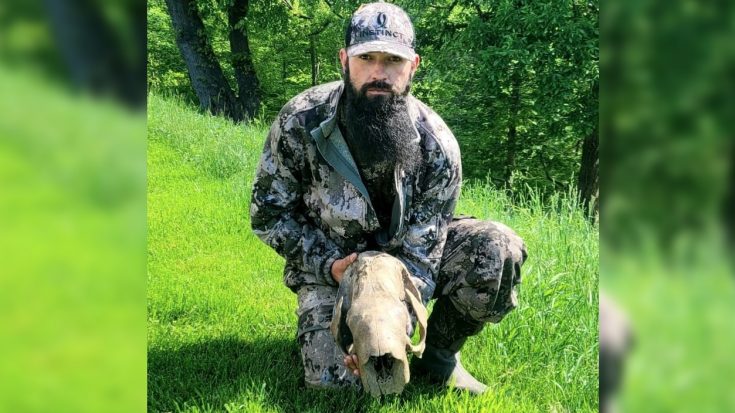 36-year-old Kevin Adkins resident of Red House in rural Putnam County was hunting with his father-in-law, Tony Hagerin West Virginia on Mother’s Day when he found a giant sloth skull that was over 11,000 years old.

“We were running and gunning for toms,” Adkins told Outdoor Life. “We’d worked a gobbler for about 30 minutes, then the bird moved off, so we picked up and headed up the creek.”

The two hunters walked across a mountain stream and Adkins said he had hunted in the area before, however, this was his father-in-law’s first turkey hunt, so he expected to have a great time.

“I looked down in the middle of the creek as we crossed it and saw a big blob of something I thought was a root ball, so I almost kicked it away,” Adkins said. “But I noticed something different about it and looked closer. That’s when I saw some molar teeth, so I picked it up.”

The object had mud, sand, and clay caked on it making it heavy, weighing around 30 pounds, so he set it down beside the creek to come back and get later after they’ve finished hunting.

At the time, he was thinking he’d clean it off and give it a thorough inspection to try and figure out what it was after he got home.

The two ended their hunt at around 10am and stopped back by the creek to claim the skull. He cleaned it off in the creek and then wrapped it in a jacket and stuffed it inside his hunting vest. Once they got home, Adkins’ wife Elizabeth asked what it was.

“She thought it was a cow skull because it was so big,” Adkins said chuckling. “But my father-in-law said no, it was something very different. That’s when we started searching the internet, sending photos to family and friends, and then I posted it on social media. That really got things moving along with trying to ID what I’d found.”

After doing some research online about the skull, Adkins’ father George believed it was from a giant ground sloth, which was said to have died out in that area of West Virginia around 11,000 years ago.

They contacted the West Virginia Geological survey office in Morgantown which helped them get a hold of several scientists, paleontologists, and university researchers.

One man, in particular, Dr. Greg McDonald, who is widely known as “Dr. Sloth” for his expertise on the prehistoric animal, got in contact with Adkins to take a look at the skull.

“Dr. McDonald verified that the skull I found is a ground sloth,” Adkins said. “Scientifically it’s known as a ‘Megalonyx Jeffersoni’ and it lived from 5 million years ago up until 11,000 years ago. It weighed over 2,000 pounds and was up to 10 feet long.”

As of now, Adkins said he’s just going to keep the skull in a safe place until he figures out what he wants to do with it. He was considering getting it carbon dated or donating it to a museum.