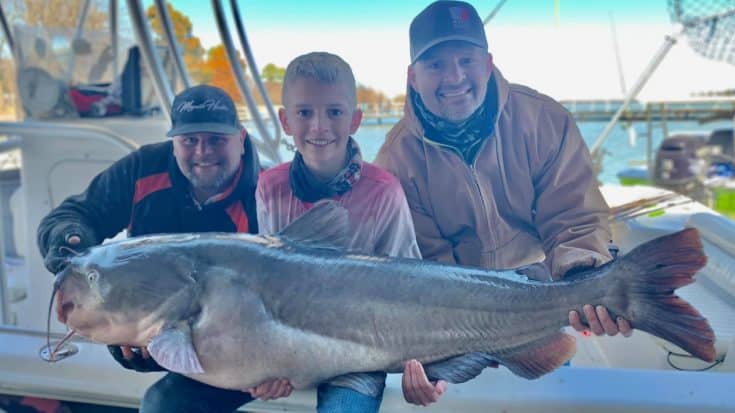 Evans said he was taking the boy, his dad Shiloh Childress, and his grandpa Brad Bradford, who were from Pickton, Texas, out for the day on Lake Tawakoni. Evans was informed that the fishing trip was gifted to Cade as a Christmas present from his grandfather, and they were all excited to get the day started.

They started off fishing in shallow water, but nothing was bitting for them so Evans decided to take them into deeper water. They stopped in about 22 feet of water and Cade cast out a bloody chunk of gizzard shad that was hooked onto a 10/0 stainless circle hook equipped with an in-line Demon Dragon rattling float to keep the bait off the bottom and reduce snags.

They sat there for about an hour and then it hit like a tornado. Cade’s fishing pole bowed over the boat and the 12-year-old jumped to his feet to grab the pole. They all knew Cade had a titanic river monster on the line.

“Cade only weighs 85 pounds, so it was pretty much a true tug of war between him and the fish,” Evans told Dallas News. “He pressed his feet against the back seat to get leverage and keep from getting pulled overboard. The fish was just about as big as he is.”

The boy fought the fight for only two minutes before they were able to get it into a net and bring it on board the boat. When they weighed the fish on certified scales, they found out it was a record-breaking 50.75-inch blue catfish that weighed 72.4 pounds.

The certification is currently pending, but according to Texas Parks and Wildlife Department’s Angler Recognition Program, Cade will be the new state record holder for capturing the blue catfish. He’ll also be awarded the Tawakoni junior angler lake record as well.

What makes this story even more remarkable is, it was just a week before Cade’s catch that 11-year-old Cowen Wittman of Kansas reeled in a 67.92-pounder from the Tawakoni and was pending certification to become the new state record holder. He beat the previous 2019 record of 67 pounds.