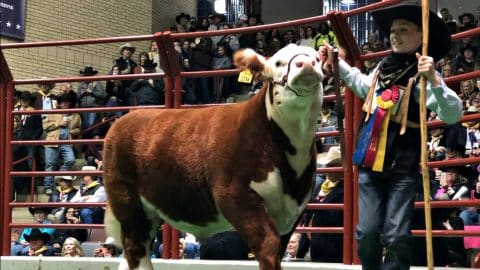 With less than one week to go until Valentine’s Day, it seemed only appropriate that a Grand Champion steer named Cupid Shuffle would sell at auction for a record-breaking $300,000. Ironically, the one-year-old Hereford steer was born on Valentine’s Day.

Cupid Shuffle was raised by 12-year-old Ryder Day who will get to keep every penny. When speaking with reporters after the auction concluded, Day was overcome with emotion as he shared what he planned to do with the money.

“It’s too much to think about,” Day said. “After we pay for college, me and my brother, we’ll help build our ranch up. Just like my parents and my grandparents and their parents before them.”

Day continued to fight back tears at a press event as he shared his love for his steer.

“It’s pretty special and amazing that this happened. I’m very surprised,” Ryder said. “He’s super sweet and it’s been a very special year for us to have him and take care of him.”

“We wanted that Hereford to break a record,” Gary Buchholz of GKB Cattle who purchased the steer said. “All that money goes to those kids to build their future, to become better adults. All of it. It’s the only rodeo where all the money to the kids. These kids work all year. We’re creating and building adults here, and you can’t put a value on that.”

Cupid Shuffle’s sale shattered the previous record of $240,000, and made the steer the first Hereford to win the competition since 1982.

Watch Ryder Day’s emotional press conference in the clip below.