120-Pound Dog Rescued After She Collapsed On Mountain Hiking Trip 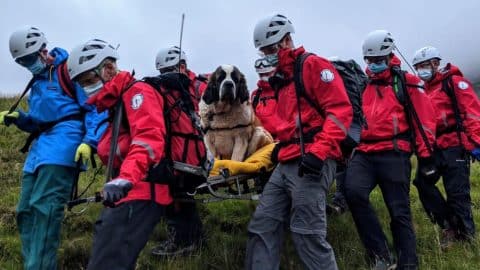 On July 25th, 2020, Richard Warren posted a video on YouTube showing a rescue team saving a St. Bernard dog named Daisy who collapsed while she was hiking with her owners on the summit of Scafell Pike.

In addition to the video, Wasdale Mountain Rescue Team posted on Facebook giving a full statement on the incident and said the dog was showing signs of pain in her back legs and refused to move. Her owners called the rescue team to come help the 120-pound dog down the mountain and they responded.

Team members arrived on the scene with a stretcher, put her on it, and quickly started walking her down the mountain because the weather was about to get worse.

On the way down they called a veterinarian who gave them advice on what to do to help her. The vet advised the team members to introduce themselves to the dog so that Daisy wouldn’t be as stressed. They were also instructed to give her analgesia for her pain.

“Wasdale Mountain Rescue Team would like to thank both West Lakeland Veterinary Group and Galemire Veterinary Hospital who got in touch and gave invaluable advice and support,” WMRT wrote on Facebook.

Take a look at the rescue video below!