14ft Gator Flips Two Kayakers Over, Blocks Them From Shore 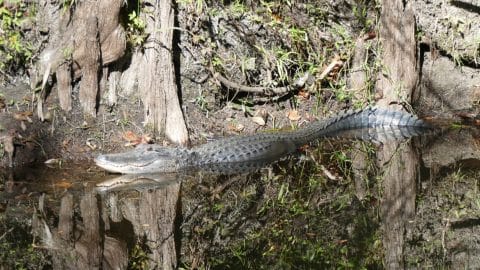 Two ladies kayaking on Lake Forest in Daphne, Alabama were scared for their lives after being flipped out of their kayaks and stalked by a 14-foot alligator.

At this point, both the women were in the water with the gator, terrified, and struggling to stay calm. They decided to swim as fast as they could back to shore, however, the gator had begun to play a terrifying game with them.

Each time the women would try to swim to shore, the gator would swim between them and the shore, preventing them from getting out of the water.

“I kept thinking I was going to die out there. Somebody tell my kids and my husband that I love them. It was crazy,” Michelle told WKRG.

Eventually, a neighbor living in the area saw what was going on and called 9-1-1. Firefighters were the first to arrive on the scene and they threw a rope to the women to pull them in. The Firefighters were shocked because they have never seen an alligator in Lake Forest before. Officials believe the gator entered through D’Olive Creek after Hurricane Sally came through.

Video Below Is An Example Of A Kayaker Encountering An Alligator