By Manly Bryant on December 20, 2019
Advertisement 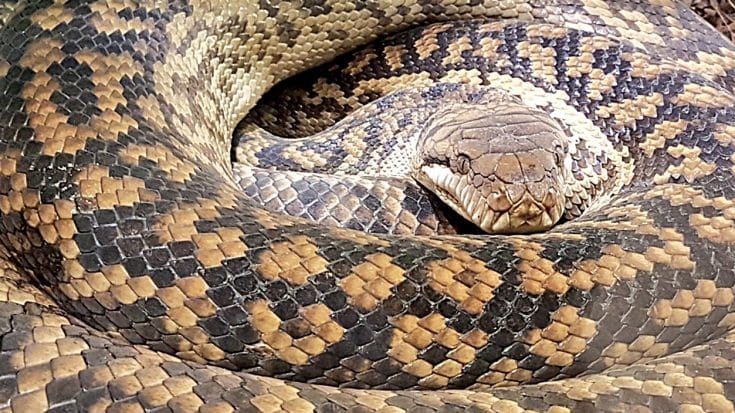 A very scary moment happened in Queensland, Australia for one family enjoying a beautiful day in the pool of their new home on Airlie Beach. The adults were walking inside when they heard a deafening scream from their 4-year-old son.

When Evan Thompson, the dad of 4-year-old Clifford, turned around to see what was the matter he could not believe his eyes. A 15-foot scrub python had launched out of the bushes and had bitten down onto his son’s leg, dragging him into some bushes.

Queensland boy, 4, saved by dad after massive snake tries to pull him to his death https://t.co/aAl5L4YZUL

The massive snake was doing its best to pull him all the way into the bushes, but the little 4-year-old boy was lucky enough to grip onto of the sidewalk preventing the snake from dragging him all the way under. While Clifford was screaming for his dad, Evan got a rush of adrenaline and ran over to the snake and gave it a hard punched to the head.

“It let go, which was great. But as soon as it leg go, it curled right back up and went straight and bit him again on the upper right leg. At that stage, it started to yank him back further and I could see it start to cause a significant cut to his leg,” Evan told 7 News in Australia.

The snake began to pull him even further into the bushes and Evan, scared for his son’s life, grabbed the snake by its jaws and pulled them open has hard as he could. The snake finally let go and Clifford took off escaping from the snake.

The amethystine python, Morelia amethistina, aka the scrub python, is Australia's largest snake. They are generally 3-7m long, but can grow to 8.5m! This beautiful fellow is at #HealesvilleSanctuary and poses beautifully for his photos! @ZoosVictoria #snake #wildoz pic.twitter.com/WcUPxC2xb1

The battle wasn’t over though; the snake continued to aggressively chase Clifford. Evan ran behind the snake and grabbed it by the tail to pull it back and screamed to his friend, “I can’t do this on my own,” as it still tried to pursue the 4-year-old.

Evan’s friend came over at that point and together they killed the snake. According to 7 News in Australia, Clifford is recovering from the deep lacerations in his leg at the Mackay Hospital. What’s crazy is this is not the first time this has happened in Queensland. The same thing happened about a year ago. Watch the video below to hear the news report on it.

A Mum in Far North Queensland has found her son in the jaws of a 4-metre python, the ordeal ending only when his grandfather grabbed a knife and killed the snake.#9News | http://9News.com.au