By Manly Bryant on February 13, 2020
Advertisement 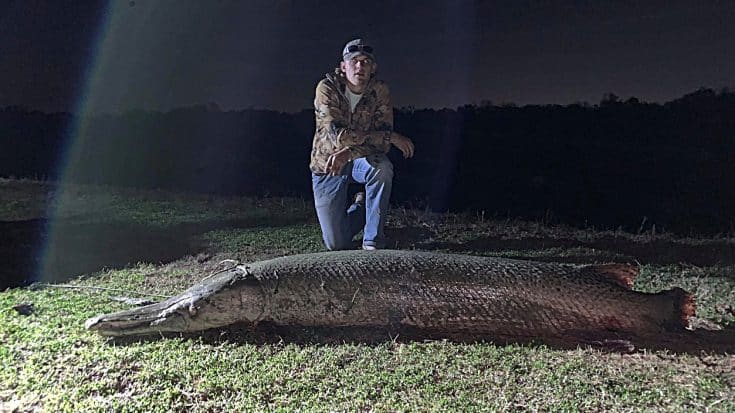 An awesome 18-year-old fisherman named Jack Pytel from Needville, Texas reeled in a massive river monster on February 1st, 2020 while night fishing down at the Brazos River.

HUGE CATCH! Jack Pytel, an 18-year-old from Needville, hauled in this powerful alligator gar after 30 minutes of…

The river monster happened to be a Texas alligator gar, and it was 7-feet long and weighed 190 pounds. This young man said he was originally out there looking to catch some catfish when he hooked onto the alligator gar.

He battled it out with the fish for about 30 minutes until it finally tired out and Jack was able to reel him in. He said the fish was very powerful and he knew he had something big when it grabbed onto the line. With patience and determination he was able to reel it in.

Alligator gar are known to grow up to 10 feet long and weigh a whopping 350 pounds. This one, in particular, is a 7-footer and had to be around 30 to 40 years old. With their torpedo-shaped body, they zoom through the water and eat just about any other fish smaller than them.

According to Wikipedia, the largest gar ever caught was by Kenny Williams on February 14th, 2011 when he was fishing the Oxbow lakes of the Mississippi River. Kenny was pulling in a net and discovered he had a record-breaking 8-foot 5-inch gar that weighed 327 pounds. Wildlife officials said it was 50 to 70 years old.