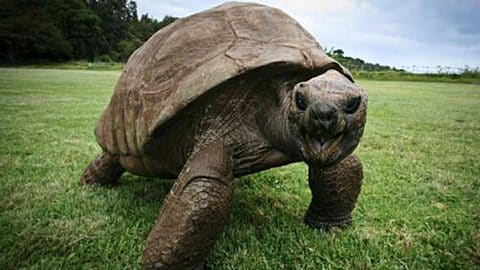 Imagine being born before cars and light bulbs were invented. Well for one beautiful baby tortoise named Jonathan who hatched out of an egg in 1832, this was the case.

Jonathan is a Seychelles giant tortoise that has lived over 187 years and has officially become the oldest-known land animal on the planet. He lives on the remote island of St. Helena in the South Atlantic where he’s been since the 1880s.

He roams around his home at the historic mansion of the governor eating grass and vegetables given to him by his caretakers. The chairperson, Teeny Lucy, of the local organization Society for the Prevention of Cruelty to Animals (SPCA) is one of the main caretakers of Johnathan.

“Jonathan is an icon here,” Lucy said. “He is a grand old gentleman who has seen it all. He landed on St. Helena in 1882 as a fully grown adult; he has seen generations of people coming and going.”

Even though Jonathan is completely blind he still gets around quite well. He usually spends his time sunbathing, eating his food and socializing with the other tortoises. Jonathan is extremely famous on the island, so much that his picture is on the island’s five-cent coin.

“Being the oldest land animal in the world, he has almost royal status here,” Lucy said. “He is dignified and interacts in a friendly way as long as people move slowly around him. We are all very fond of him.”

Jonathan has always been super healthy until a few years ago when the vet noticed his beak was becoming soft and crumbling. She immediately got him on a different grass diet and new nutrition and he recovered back to great health.

May you live another 187 years Jonathan!