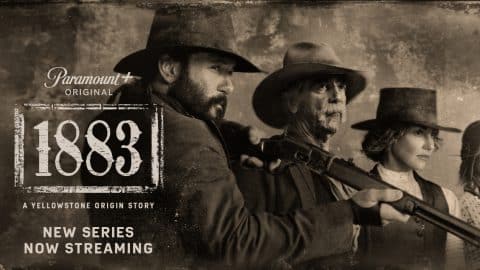 According to Paramount+’s parent company ViacomCBS, the Yellowstone prequel 1883 that premiered on Sunday brought in the biggest audience since Fear The Walking Dead premiered to more than 10 million viewers six years ago in August of 2015.

1883 was said to have averaged about 4.9 million viewers for its on-air debut on Paramount+ and set a series premiere record by becoming the most-watched series on cable TV right now.

In addition to receiving 4.9 million viewers on Paramount+, it also pulled 600,000 viewers on CMT’s simulcast of the premiere, and according to Nielsen figures, including the encores, 1883 brought a total of 6.4 million viewers to the Sunday night show.

The prequel shattered the premiere of Yellowstone which brought in 2.83 million viewers in June of 2018. It also beat this November’s Mayor of Kingston which comes from Sheridan and, like 1883, had Yellowstone as a lead-in and it premiered at 2.6 million.

The creator of the show, Taylor Sheridan was very pleased to see how big of an audience it pulled to the at-home streaming service on Paramount+.

Paramount+ never releases detailed ratings data for its programming like most other streamers, however, ViacomCBS was very certain by publicly stating that it was for sure the most-watched series premiere to date on Paramount+.

Check out the trailer below if you have not seen the show yet!

Wath The Trails For 1883 Below