By Miranda Raye on February 14, 2022
Advertisement 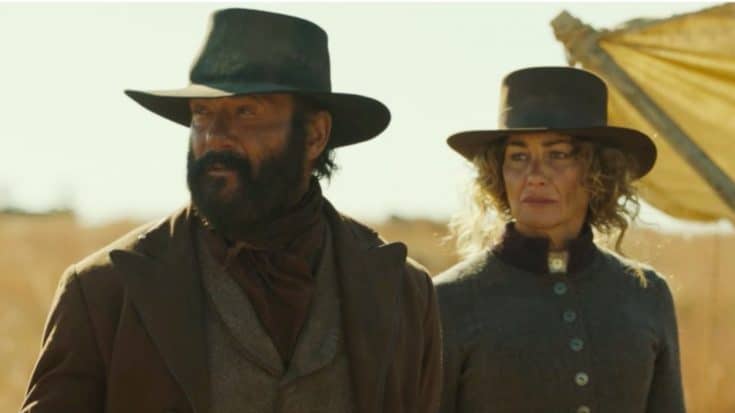 It’s the start of a new week, which means we have another new episode of 1883 to recap for y’all.

Episode Eight of 1883 debuted on Paramount+ on Sunday (February 13). It was titled “The Weep of Surender.”

Since the Super Bowl was also that night, it’s likely some of you still need to catch up on the newest episode of the Yellowstone prequel series. So be warned, there are spoilers ahead. DO NOT keep reading if you don’t want to have anything ruined for you.

But do keep reading if you want a recap of everything that happened in Episode Eight!

@1883Official is a Deep, passionate, heart breaking, saddening, tear inducing ride through love and death in the old west. You can't find a better show than this. 100% worth the watch.

When we last left off, the travelers were in distress following the tornado that destroyed most of their wagons. Bandits also attempted to steal their cattle, but Shea (played by Sam Elliott), Thomas (played by LaMonica Garrett), and James (played by Tim McGraw) managed to fight them off.

The Comanche Warrior, Sam, (played by Martin Sensmeier), helped the men fight the bandits and saved Elsa (played by Isabel May). The young Dutton daughter kissed Sam during the storm, and the two shared an instant connection.

As Episode Eight begins, we see that Sam has opted to stay behind with the Duttons and the rest of the travel party, at least for the time being. He helps gather up a group of mustangs along with Elsa and some of the camp’s men. Shea is impressed by how well Elsa rides, and compliments her in front of James.

Elsa tears her jeans in the process, so Sam takes her to the Comanche camp. There, he introduces her to two Comanche women who fashion her a pair of chaps.

Shea is starting to worry the group will never make it to Oregon on time. He fears the approaching winter, and feels it may be best if he changes course and takes everyone to Denver instead.

But the travelers are actually against the idea of going to Denver. The land there isn’t free, and they don’t want to end up being miners and maids just like they were in their home country. James steps up and says that he and Margaret (played by Faith Hill) will be taking their family on to Oregon, if anyone wants to follow them.

Elsa tells Sam she wants to live out on Plains with him rather than go on with her family. He tells her the mountains are worth seeing, so she makes him promise he’ll take her to see them one day. He agrees, and rises to go make an offering to James in exchange for Elsa’s hand in marriage.

But then Sam spots a herd of buffalo, and draws Elsa’s attention to them. He helps her hunt, and she kills one of the animals. Sam cuts out the buffalo’s heart and tells Elsa to take a bite of it, saying “Its strength is your strength.” The couple rides into camp and the Comanches celebrate the kill.

Margaret is horrified to see her daughter’s face covered in blood. She’s also horrified to realize that Elsa is actually enjoying her life out on the Plains, far from civilization.

When Shea realizes that even Thomas plans to travel with the immigrants and James, he decides that he won’t leave them behind. But he makes James the new leader of the group, telling him he will simply be around for protection and guidance.

Sam later brings his offering to James…a wild stallion from the mustang herd they rounded up earlier. Realizing what this means, Margaret freaks out, telling Elsa she won’t allow this to happen. But Elsa rebukes that she’s 18, and she’s allowing it to happen.

Sam and Elsa are the greatest thing since covered wagons. #1883

Elsa and Sam then walk off from camp and spend the night together. Margaret and Elsa reunite in the morning while Elsa bathes. Margaret tries to reason with Elsa, explaining how as a mother, it’s her duty to pick her up and help her through life. Elsa responds, “I love you, but I’m a woman. I pick myself up.”

Realizing she’s been defeated, Margaret begs Elsa to at the very least have a wedding ceremony with Sam and say their vows before God. But Elsa responds that she sees no need for ceremony, since Sam saved her life twice and James’ life once. “God sent him,” she says. It’s clear that Elsa and Sam consider themselves to be married, even though there was no ceremony.

Elsa does humor her mother in one way. She says she’ll follow her family to Oregon, see what life is like there, and then return to Sam. That way, she’ll know where to visit when she wants to bring her children to see Margaret and James some day.

The group gets moving and eventually rests near some water. Sam helps James break the wild stallion he brought for him. James asks Sam what he will do if Elsa changes her mind and wants to return to her family. Sam promises he’ll bring her back to him.

Sam and Elsa spend the night together once more, and Sam teaches her some Comanche words and phrases, one of them being “I love you.” When she wakes in the morning, she finds a beaded vest and necklace next to her in the spot where Sam had been before. She proudly dons the new attire and passionately kisses Sam goodbye as they part ways, vowing to reunite in the spring.

As Sam rides away, she yells after him and tells him she loves him in Comanche. He responds by calling her the wife of a warrior, and lets her know she has his heart.

With tears in her eyes, Elsa rides off to rejoin her family and the rest of the wagon train on their journey.

That’s how Episode Eight of 1883 concluded! What did y’all think of the new episode? Feel free to share your thoughts with us.