By Miranda Raye on February 22, 2022
Advertisement 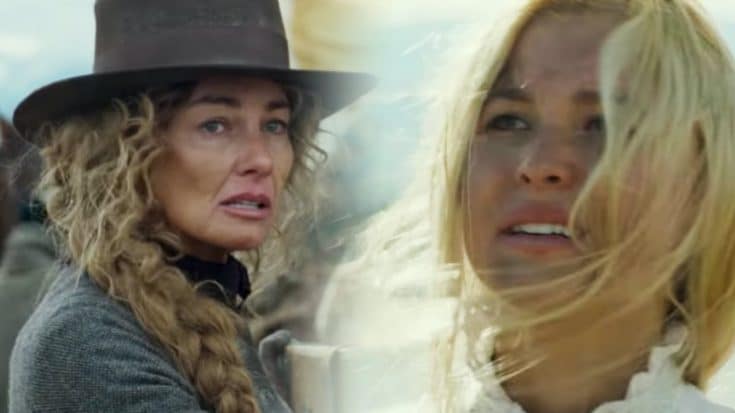 1883 is nearing the end of its first season. The next-to-last episode was Episode Nine, titled “Racing Clouds.” It was released on Paramount+ on Sunday, February 20.

In Episode Nine, we finally revisited the opening scene of the series, which shows Elsa Dutton (played by Isabel May), being shot with an arrow in the midst of a battle against a group of Lakota men. The episode showcases the events that led up to that moment…and the heartbreaking aftermath that follows.

We’re about to recap the entire episode for you here. DO NOT keep reading if you don’t want to have anything spoiled for you.

Now that you’ve been warned, let’s dive in to what happened in Episode Nine of 1883.

The episode opens in a shocking way. Risa’s (played by Anna Fiamora) horse startles when it encounters a rattlesnake, and bucks her off. Her husband, Josef (played by Marc Rissmann) rushes to her side, only to be bitten by the snake.

While the travelers rush to help the ailing Risa and Josef, Shea (played by Sam Elliott), Thomas (played by LaMonica Garrett), and James (played by Tim McGraw), encounter another problem. They stumble upon a Lakota camp that has been destroyed by a bunch of thieves. The women and the children were brutally killed by the men who stole their ponies.

A horrified Shea realizes the wagon train’s tracks lead right to the Lakota camp. He knows when the Lakota men return, they will assume they were the ones responsible for their families’ deaths.

The three men decide the best course of action is to track down the thieves and kill them. They hope by doing so, they can intercept the Lakota men and prove their own innocence before it’s too late.

As they leave, they tell everyone to remain where they are. But Cookie (played by James Jordan) feels like a sitting duck waiting near the destroyed Lakota camp. He says he’s moving on to a fort that’s about six hours away, but he plans to make it there in four. Everyone decides to follow Cookie, especially since Risa and Josef are in dire need of medical care.

Margaret (played by Faith Hill) and her children initially stay behind. But Margaret eventually decides to follow the group, feeling there will be strength in numbers. First, she gets Elsa to change into her last remaining dress, fearing she’ll receive unwanted attention if she rides into the fort wearing her jeans and Comanche vest her husband, Sam (played by Martin Sensmeier), gave to her in Episode Eight.

Elsa reluctantly changes into the dress and Margaret braids her hair before they and young John (played by Audie Rick) leave to catch up with the wagon train.

Meanwhile, Shea, Thomas, and James encounter the thieves who killed the Lakota women and children. They exchange some heated words before the men gun down all of the thieves.

Unfortunately, the trio was not able to catch up with the Lakota men. After finding the destruction at their camp, they head off in pursuit of the wagon train…just as Shea feared they would.

A devastating battle ensues. Cookie dies after being shot with multiple arrows. The next person the Lakota men see is Elsa, who begins riding away in fear.

Under the guidance of Wade (played by James Landry Hébert) and Colton (played by Noah Le Gros), the wagon train forms a circle to protect themselves while they fire at the attacking Lakotas. Margaret tries, and fails, to take down the men pursuing Elsa.

Elsa decides to put herself in danger and rides away from the wagon circle in the hopes that some of the Lakota men will follow her, making things easier on the pioneers. Her plan works, but there were still many lives lost in the battle.

At long last, we finally get context for the opening scene of 1883.

Elsa rises from the ground to see the devastation around her, and encounters a Lakota man. After a tense exchange, Elsa shoots him with a handgun while he shoots her through abdomen with an arrow. The Lakota man dies, but Elsa lives, and fights on until she finds the Lakota leader (played by Tokala Black Elk).

Elsa speaks to the leader in Comanche, and he asks her where she learned those words. She reveals that her husband is a Comanche warrior, and shares her Comanche name “Lightning with the Yellow Hair.”

The Lakota leader softens, and gives Elsa the chance to explain that the wagon train was not responsible for their family members’ deaths. She tells them James is pursuing their killers, and promises he will deliver justice.

Impressed, the Lakota leader calls of the fighting and the men leave. Elsa stops any further bloodshed, but her own life is now on the line. Margaret, Wade, and Noemi (played by Gratiela Brancusi), remove the arrow from Elsa and cauterize the wound, then leave her to rest and hope for the best.

Shea, Thomas, and James encounter the Lakota men and let them know they have killed the people who killed their wives and children. They learn that the Lakota were involved in a battle against the wagon train, and the leader gives Elsa credit for bringing the fight to an end.

Later that night, James comforts Elsa as she rests in the wagon. She assures him the injury doesn’t hurt, but he tells her it’s infection that could kill her, not the shot itself. Elsa seems to believe she’ll be fine, and wants to keep the arrow so she can show it to Sam when they reunite.

James leaves Elsa and asks Margaret to take a walk with him. It’s assumed the arrow clipped Elsa’s liver, which makes her injury more serious. Plus, when James asks to see the arrow, it’s “filthy,” leaving him to believe that an infection is sure to set in.

That’s when James gets brutally honest with Margaret. He tells her that Elsa is going to die, and there’s nothing they can do. Margaret is horrified at first, and slaps James in anger. But she quickly realizes he’s right, and laments that they won’t be able to visit Elsa’s grave if they have to bury her somewhere along the trail.

James tells Margaret that wherever they bury Elsa, they’ll settle there. And they’ll keep traveling until they find a place that’s worthy enough to be their daughter’s final resting place.

It’s assumed this final resting place will be the future location of the Dutton ranch.

Paramount Plus better make Taylor Sheridan rewrite this ending of Season 1 of 1883 if Else dying is the planned end result. Elsa cannot die!!!. I have wept as if I was about to lose my own child. Her character is the symphony in the background of a film causes audiences emotion

The episode ends with Elsa waking in the morning. She feels fevered and is in greater pain than the day before. But James and Margaret agreed they’d lie to her about her well-being so she wouldn’t be concerned. So they tell her she’s alright and encourage her to get up and ride her horse. Elsa changes back into her Comanche vest and jeans and slowly mounts her horse, seeing the pain in her father’s eyes.

As hard as he tries, James can’t hide his feelings from Elsa. She realizes then and there that her fate is likely sealed, and her death seems imminent.

That’s where Episode Nine of 1883 ended. Stay tuned for the season finale on February 27 to see if Elsa lives or dies, and learn what becomes of the rest of the Duttons and the other members of the wagon train.