By Manly Bryant on November 23, 2022
Advertisement 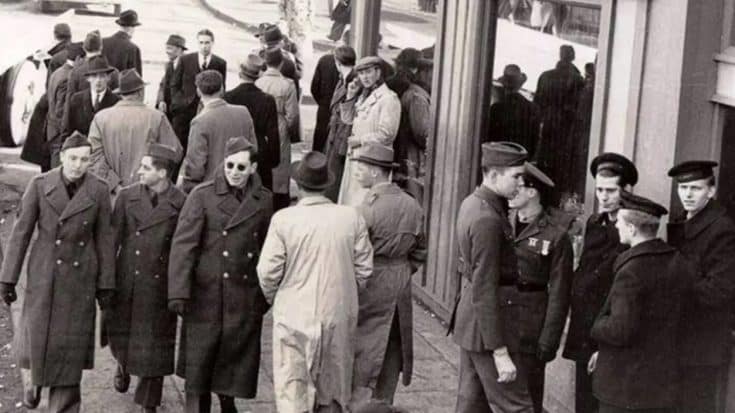 A photo taken in 1943 appears to show a man getting caught holding a cellphone to his ear and talking on it and it’s got social media buzzin’.

The photo was posted to an Icelandic Facebook group called Gamlar ljósmyndir back in 2016 by Kristjan Hoffmann. It got a lot of attention at the time and it’s still getting attention now.

Hoffmann wrote in the caption, “One thing that draws attention to this beautiful picture is that above the window, in the corner in the middle of the picture, a man is leaning and is on a cellphone. I don’t know what to say, I don’t think he’s just talking on the phone… He’s in a stupor, standing alone and wearing a different headdress than the others and a scarf and acting like we would do today.”

The photo was said to have been taken back in 1943 in Reykjavík, Iceland, during World War II, and shows the mysterious man standing around a ground of deployed US soldiers.

While most people in the photo are wearing military hats and dark suits and coats, the “time traveler” is wearing a lightly colored trench coat, a scarf, and wearing a hat different than everyone else.

What’s most shocking is, he is holding his hand close to his ear as if he’s speaking on a cellphone which was not invented yet.

While some people speculated that he was a time traveler, others said that he was just checking his watch to see if it was still working.

Others also added that he could have been simply using a tobacco pipe and had gone to scratch his ear at the moment the photo was taken.

A year ago, the photo was also featured in a conspiracy theory video on YouTube titled “10 REAL Cases of Time Travel That Cannot Be Explained.”

You can watch the video below as they further discuss how interesting the photo is.