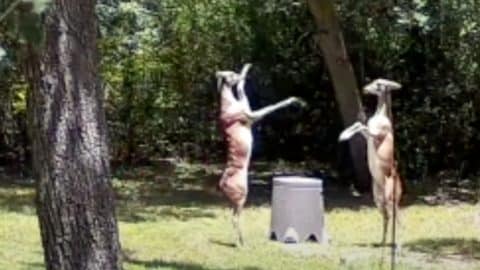 Gay Isber Miller was having a family get-together on her property in Lake Somerville, Texas when her home security camera captured a couple of deer having a boxing match in the backyard.

The home security footage showed one female deer standing in the backyard peacefully eating around a corn feeder that the family left out for deer to munch on. The family did this in hopes of seeing more wildlife since they live in a very beautiful woodland area, but on this particular day, they got something a little more entertaining.

“They’re well-fed deer so I don’t know why they feel they need to fight over it,” Miller said, according to FOX News. “There are about 20 more pounds of corn they can eat, but they’re animals so they’re not thinking groceries, they’re thinking ‘I want that corn right there.’”

Both of the deer began kicking their front legs at each other as if they were having a wildlife boxing match. Not only was the boxing match recorded on camera but the family said they also witnessed the fight in person with their own eyes.

“We just happened to be there,” Miller said, “otherwise we would have probably never seen it on our cameras.”

According to Miller, the feeder had corn, dried beets, and dried apples in it, which are some of their favorite treats. They also mentioned that they’ve seen deer fights before but this one was very different than the others ones from the past.

“We’ve seen it once before that same kind of a fight with them on their hind legs, but that was two bucks so this time we were like ‘look at that, it’s girls that are fighting.’ What’s unique and funny about this is they’re on their hind legs, and they’re in such fighting mood…they look like alien people.”

Watch Footage Of The Boxing Deer Below