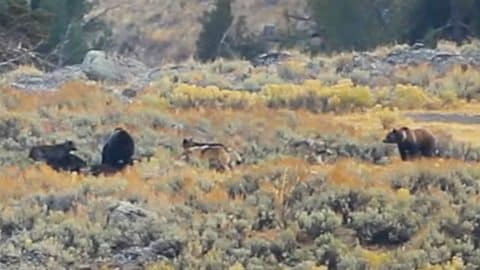 What were these two groups of animals fighting over? A bison carcass, otherwise known as dinner in the great wilderness.

At the start of the video, just one grizzly is guarding the carcass when he’s accosted by the pack of wolves attempting to take the bison carcass.

Another grizzly arrives on the scene, possibly to help the first grizzly stand his ground. Six of the seven wolves in the pack quickly work to chase away the second grizzly, while one wolf remains with the first grizzly.

Finally, the lone wolf runs away from the grizzly and his bison carcass to rejoin the rest of the wolf pack.

In the last few seconds of the decade-old video footage, the wolves look like they might be heading back to the original grizzly to try to steal the carcass once again.

While you’ll have to use your imagination to decide exactly how this scenario ended, one thing is clear: Yellowstone is an intense, unpredictable landscape.

Check out the full video below. It’s truly remarkable.