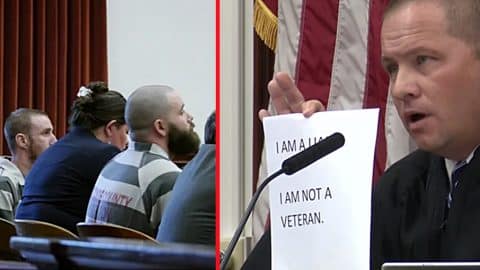 Falsely Claiming To Be Military

Two men have been charged by the court for falsely claiming to have served in the military and were ordered to wear signs that say, “I am a liar. I am not a veteran. I stole valor. I have dishonored all veterans,” but wait, there’s more…

Before we get into it let’s take a couple of steps back and start from the beginning. The two men are Troy Allan Nelson (age 33) and Patrick Morris (age 28) who got in trouble for violating their probation.

About Patrick Morris And His History

Patrick was initially charged with stealing $1500 worth of stuff from his landlord’s garage back in April 2017. When he went to court he told Cascade County District Judge Greg Pinski that he did seven tours to Iraq and Afganistan and suffered from PTSD (post-traumatic stress disorder) due to being in combat.

He even went to great lengths to make up a story that he was injured from an IED (improvised explosive device) when it blew up on him and sent him to the hospital for a hip replacement. The Judge looked into it and found out everything was a complete lie and ordered him to do 400 hours of community service in which he only completed 10, giving the excuse that he couldn’t do it and hold down a job at the same time.

About Troy Nelson And His History

We’ll get back to him in a second, but for now, let’s talk about the other guy Troy who was convicted of forgery and abusing an elder back in January of 2018. He spent over $14,000 of this elder’s money who was his 86-year-old neighbor and burglarized her home.

When Troy appeared in court he also lied saying that he was in the military and even managed to enroll himself into Veterans Treatment Court. Both of the men somehow didn’t get charged for “stolen valor” which is a federal crime in the United States.

Punishing The Men For Their Crimes

Since both the men lied about being in the military the judge is making them do the following:

In addition, the men were ordered to complete 441 hours of community service and most embarrassingly, ordered to attend the Montana Veterans Memorial on Memorial and Veterans Day wearing signs for 8 hours that read, “I am a liar. I am not a veteran. I stole valor. I have dishonored all veterans.”

2 men who lied about military service must wear sign that says 'I am a liar,' judge rules https://t.co/iLPdCHTFxd via @usatoday

Why The Judge Is Making Them Do This

The judge went on to say that he wanted to make sure the men received his message of not disrespecting the military and those who served this country with the lies they made up. The attorneys of the convected men tried to object to the judge’s decision to make them wear the signs but the judge said due to their acts of stolen valor he has the discretion to do so.

In the end, Troy and Patrick both apologized for lying to the court and expressed their regret for disrespecting the men and women of the U.S. military.

Men Who Lied About Military Service Must Wear "Liar" Signs

Men who committed crimes while pretending to be military veterans sentenced to wear "I am a liar" signs. #StolenValorKRTV Great Falls: https://www.krtv.com/news/military-matters/two-men-sentenced-in-great-falls-for-stolen-valor