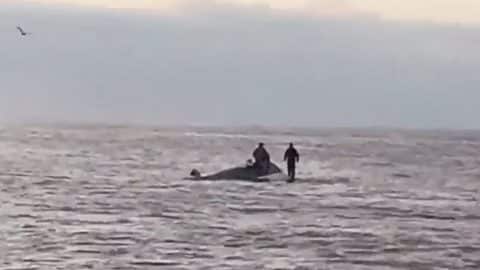 According to an ABC News report, two Navy SEALs were rescued 27 miles off the coast of San Diego after their boat capsized in the ocean.

Apparently, their boat capsized at 4am in the morning as they were trying to sleep. They were able to put out a distress call, but weren’t able to give their location before the boat sank.

Spotted By Fishermen Passing By

Fortunately, they were spotted by some fishermen passing by who were using high-quality binoculars to look for tuna and they noticed the men waving their hands about three miles away. As the fishermen moved closer to investigate they realized what happened.

The captain of the rescue boat, Jason Rombotis says once he got close to the SEALs he asked them if there were anyone else and they said: “No just us, we’re good.” Jason then pulled the Navy men onto the boat and gave them hot coffee.

“They got on the boat with no wallets, no car keys, nothing, just wet clothes … they just hung out the rest of the day.” Jason said.

The SEALs ended up spending the night with the fishermen who finished their fishing trip and dropped them off at the Harbor Police Dock on Shelter Island in San Diego.

Captain Jason says they were very fortunate that the weather was nice because if it was foggy or windy they would have been in a very different situation.