By Jennifer Pernicano on October 15, 2020
Advertisement 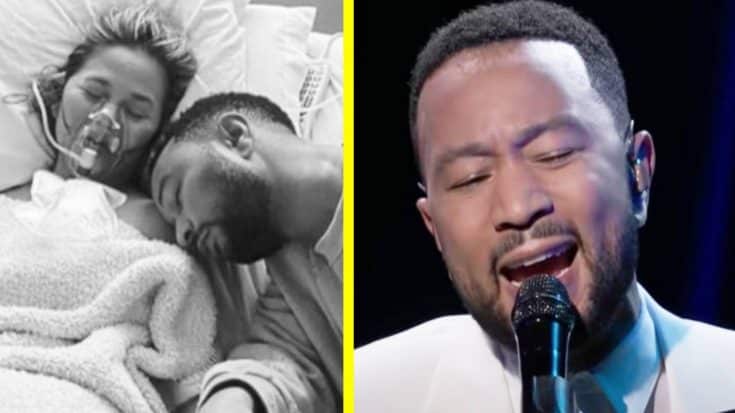 Just two weeks after Chrissy Tiegen and John Legend lost their baby, The Voice coach took the stage at the Billboard Music Awards on Wednesday (Oct. 14) to deliver an emotional performance.

On Sunday, September 26, Tiegen was hospitalized due to excessive bleeding from her placenta, which required her to have multiple blood transfusions. On September 28th, Tiegen assured her fans that she and the baby were “completely fine.”

But in an Instagram post on September 30, Tiegen told her 31.7 million followers that the baby, who they named Jack, did not make it.

“We are shocked and in the kind of deep pain you only hear about, the kind of pain we’ve never felt before. We were never able to stop the bleeding and give our baby the fluids he needed, despite bags and bags of blood transfusions. It just wasn’t enough,” she wrote along with several black and white photos from the emotional process, including one of her and her husband cradling their baby boy.

We are shocked and in the kind of deep pain you only hear about, the kind of pain we’ve never felt before. We were never able to stop the bleeding and give our baby the fluids he needed, despite bags and bags of blood transfusions. It just wasn’t enough. . . We never decide on our babies’ names until the last possible moment after they’re born, just before we leave the hospital.  But we, for some reason, had started to call this little guy in my belly Jack.  So he will always be Jack to us.  Jack worked so hard to be a part of our little family, and he will be, forever. . . To our Jack – I’m so sorry that the first few moments of your life were met with so many complications, that we couldn’t give you the home you needed to survive.  We will always love you. . . Thank you to everyone who has been sending us positive energy, thoughts and prayers.  We feel all of your love and truly appreciate you. . . We are so grateful for the life we have, for our wonderful babies Luna and Miles, for all the amazing things we’ve been able to experience.  But everyday can’t be full of sunshine.  On this darkest of days, we will grieve, we will cry our eyes out. But we will hug and love each other harder and get through it.

Since then, the married couple has stayed quiet on social media. The BBMAs marked Legend’s first public appearance since they lost Baby Jack. He performed his song “Never Break,” which he released on his most recent album Bigger Love.

The BBMAs host – and Legend’s fellow Voice coach – Kelly Clarkson introduced Legend by saying, “I want to take a moment to talk about a friend who inspires me on the daily. Not only as a musician, a songwriter, but as a human. John Legend is one of my favorite people on this planet and it’s easy for us all to feel that way about them because he and Chrissy just have this warm way of inviting us into their world—the highs and the lows.”

She continued, “My heart, obviously all of our hearts, go out to you both in this very difficult time and I’m thankful that you continue to share your light and your talent with all of us.”

Sitting behind a grand piano, Legend said, “This is for Chrissy,” before diving into the emotional ballad.

The lyrics, which he wrote long before they lost their baby, are so powerful and appropriate for what they are currently going through.

Thanks to his time on The Voice, we’ve seen him perform a number of times, but he has never sung a song quite like this before. You can tell that this song has now taken on a new meaning for him since losing Jack. His voice breaks a couple times during the performance as though he is trying to not cry in the middle of it.

Watch his performance below and make sure to have a tissue nearby.