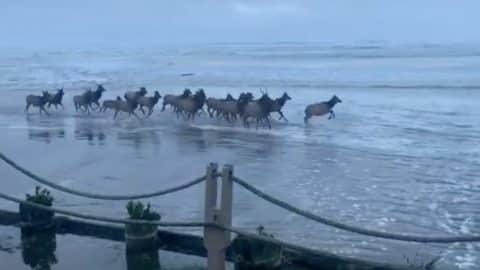 Eric Brough from Seattle, Washington was enjoying some vacation time outside of his motel right beside Cannon Beach in Oregon when he spotted a herd of about 20 elk running across the shoreline.

Eric said “Oh my God!” in astonishment when he first noticed the herd, KATU reported.

The elk continued to run down the beach and got closer to the camera as Eric was filming and they all stopped right in front of the hotel. As the waves pulled back and pushed forward towards the herd, they began to run away from the tide.

The tide was coming in strong and chased the elk far down the shoreline and continued to rise higher and get deeper. The owner of the hotel said he’s never seen anything like it before and that the tide hasn’t been this high since 1967.

Another person who was viewing the herd said that the elk were up against the surge of the King Tide, while another person added that she saw 20-foot waves earlier that day. It was risky for the elk to be out there on the shoreline but it sure was beautiful. Multiple people visiting and residents in the area also filmed the herd running down the beach.

Watch Footage Of The Elk Herd Below