20 Years Ago: Daytona 500 Ends In Tragedy With Death Of Dale Earnhardt 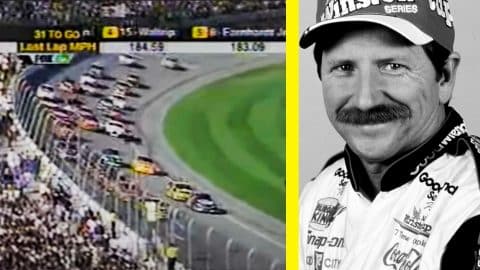 Dale Earnhardt Sr. was a true racing legend and was regarded as one of the greatest drivers in NASCAR history. He was given several nicknames such as “Ironhead,” “The Intimidator,” and “The Man in Black.”

Tragically, his incredible career as a talented driver and beloved sports personality came to a devastating end during the final laps of the 2001 Daytona 500 – held on February 18th, 2001.

"There's a lot of icons in sport, but there's only a few that seem to be the guy."@E60 shares how Dale Earnhardt continues to have an impact on the racing community, even nearly 20 years after his death.

During the final few laps of the race, three teammates all vying for the same prize and notched in the top three places. Michael Waltrip was poised to win with teammates Dale Sr. and Dale Jr. hot on his heels – which would have made for an incredible team victory.

Sadly, the day was marked by tragedy as a few moments later Earhardt Sr. made light contact with Sterling Martin’s car and lost control of his own car. As he struggled to regain control while traveling upwards of 150 MPH, he turned the car slightly and came straight in front of Ken Schrader’s vehicle striking the outside wall of turn four with incredible force and getting pinned by Schrader as they slowly lost momentum.

Ken Schraeder was able to exit his vehicle after the cars came to a stop and rushed to check on Earnhardt in the famous #3 car. It was then that Schraeder knew his friend was in serious trouble and frantically called for medical assistance, flagging the field medics over. After being transported to a nearby hospital emergency trauma center, doctors determined that Dale Earnhardt Sr. had died on impact from a basilar skull fracture.

Now, 20 years later – the world of NASCAR and the safety measures taken to protect drivers, teammates, crewmen, and the spectators have made incredible leaps. A critical change in safety devices was implemented as a direct result of Dale Sr.’s fatal accident…and it likely has saved countless lives.

In October 2001, NASCAR mandated HANS devices be used in all cars for the top three series. The HANS device is a “Head And Neck Support” that greatly reduces driver injuries in crashes and specifically the basilar skull fracture injury.

The legacy of Dale Earnhardt Sr. has lived on for 20 years since his death and he remains one of the most influential drivers in the history of American motorsports.

Watch this emotional interview between Dale Jr. and Ken Schrader where they discuss the events of that day below.

Before @DaleJr let Ken Schrader leave the @DirtyMoMedia studio, he shared an emotional message on what he means to the Earnhardt family. #DJD pic.twitter.com/yuUtVhuJcB