By Manly Bryant on May 6, 2019
Advertisement 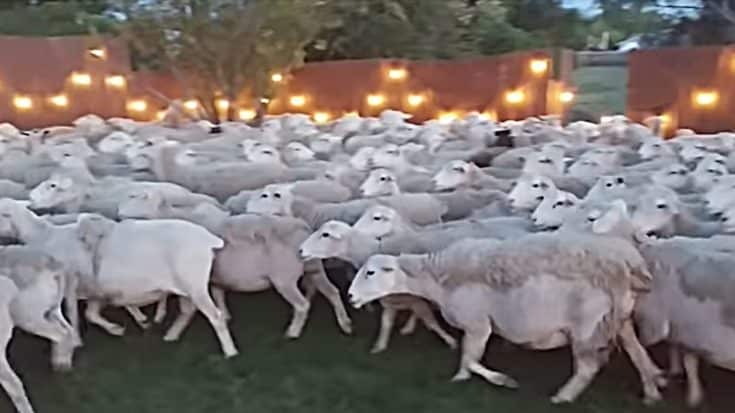 “Oh no!” Scott Russo screamed as the camera flips onto him filming his backyard entirely filled with a flock of 200 sheep. Apparently, their gate was left open and the sheep saw it as an opportunity for a safe place to stay. However, when he tried to get them to leave, they didn’t want to go.

The incident happened at the home of Scott and Erin Russo, on April 22nd in Lincoln, California. According to BoredPanda.com, the city allowed the sheep to eat the grass and clear out the overgrowth to prevent wildfires for 2-3 days out of the year. Erin said they were used to the sheep walking past their house and wanted to open the gate and let one inside so their two daughters, age four and age five could see it – that’s when this happened…

“The curious sheep were peeking their heads in our back gate for a while but would scamper off as soon as they saw us. Then one came in, which became a dozen in the blink of an eye, and then hundreds. When we tried to corral them out, they would only shift to the other parts of the yard as others continued to flood in through the gate. It happened very quickly.”

The sheep seemed to like their new, well lit, gated patch of grass and when Scott tried to shoo them out, all they would do is switch to the other side of the yard. Erin and Scott had to come up with a new strategy to get the sheep out so Erin grabbed her daughter’s tambourine, got on their small trampoline and started jumping andmaking noise while shaking the instrument in attempts to spook the sheep away.

At the same time she was doing that, Scott made his way to the gate entrance to block other sheep from getting in and to lead the ones in his yard, out. Scott managed to block the sheep outside from coming in and while Erin made noise, the sheep finally started exiting.

It was incredibly hilarious to watch the sheep pile over each other trying to squeeze through the small fence gate. However, one by one, they all pushed through as Scott gasped with excitement saying “keep shaking it, it’s working!” They later shared the video on YouTube and Facebook and everyone couldn’t help but comment their thoughts about it.

In the end, Scott and Erin managed to shoo all the sheep out of the yard and what was at first a frightening out-of-control situation turned out to be one of the funniest home videos ever.