2018 CMA Award For Album Of The Year Announced 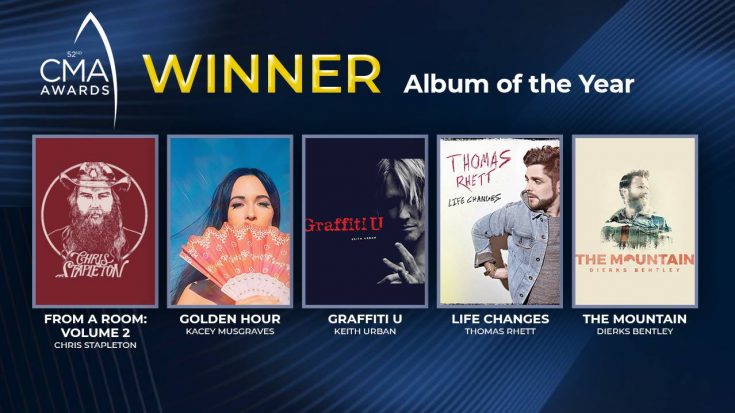 This year, several artists were up for Album of The Year at the CMA Awards. Chris Stapleton, Kacey Musgraves, Keith Urban, Thomas Rhett, and Dierks Bentley were all in the running – each having shown their musical prowess and creativity with their albums.

Chris Stapleton’s From A Room: Volume 2

Released last December, the album featured songs like “Millionaire” and Midnight Train to Memphis.”  Stapleton’s raw, gritty vocals are highlighted throughout the album as he sings about old towns, beat up cars, and true love. That is pretty dang country to us.

Released in March, Musgraves’ Golden Hour creates a bridge between country music and rebel hippies. She artfully created new songs and recycled lyrics from old ones for songs like “Slow Burn.” She expresses her desire for things to move slowly throughout her psychedelic album which has caught the attention of music critics from various genres.

When Keith Urban needed a great album and tour name – “Graffiti U” just seemed to fit. With songs like “Coming Home,” “Female,” and “Never Coming Down,” Urban stuck to his roots of upbeat summery tunes but added in a little extra spice this time. His talents continue to be timeless as his international Graffiti U tour has people all around the world talking.

Released in September of last year, Rhett’s Life Changes album was a musical masterpiece. With themes of growing up, falling in love and even watching love move forward without us – the whole album is relatable. Rhett has received praise from the country music world and debuted at number one on the Billboard 200.

Bentley’s The Mountain has been going strong ever since it was released in June. With songs like “Woman, Amen” and “Burning Man” the album brings Bentley’s personal life and convictions to life. He performed his “Burning Man” duet with Brothers Osborne during the ceremony and it wowed everyone in the crowd.

With so much talent among the nominees, it was a tight race to begin with. But, after weeks of excitement, the winner was finally announced.

Y’all say hello to your new 2018 Album of the Year: Golden Hour by Kacey Musgraves!!!

And the #CMAawards winner for Album of the Year goes to…@KaceyMusgraves' Golden Hour! Congrats! pic.twitter.com/E2XVOg5mwF

Ten years ago to this day, the gal moved to Nashville to follow her dreams. Looks like she made the right move!

Yes, @KaceyMusgraves. Yes. Ten years ago today, she moved to #Nashville. Tonight, she wins Album of the Year. ✨ #CMAawards pic.twitter.com/nUjHFWMV8S

She worked tirelessly on the album and while all the albums were absolute hits that we will love and cherish forever, it is great to see how happy winning this award made her!