2018 CMA Award For Male Vocalist Of The Year Announced 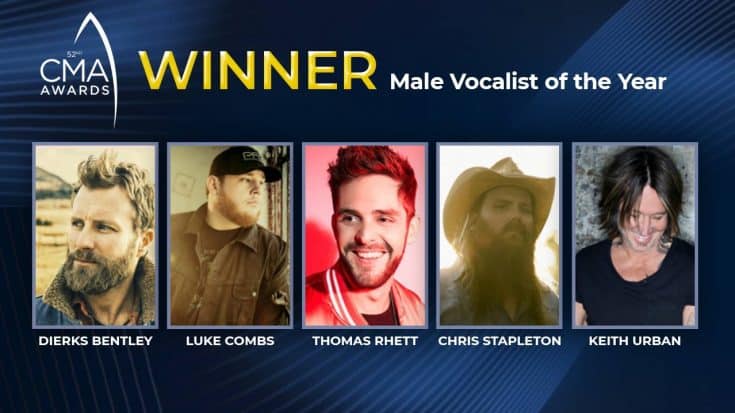 This year all the categories for the CMA Awards had full line-ups of incredible nominees. From new artists to longtime country music singers, no lack of talent will go unnoticed. One of the biggest awards given out at the ceremony is for the title of Male/Female Vocalist of the Year. With a history of country music icons taking home the title, it’s no wonder the anticipation for this year’s winner has fans excited.

A History Of Musical Legends

The title for Male Vocalist of the Year has a history of incredible talent trailing behind it for today’s stars to live up to. Past winners include Johnny Cash, Alan Jackson, Blake Shelton and many more country legends. All the winners have the same unforgettable influence that has left a print on the country music world forever. So, it was no surprise when this year’s nominees brought their best.

The 2018 CMA Male Vocalist of the Year nominees are:

.@ChrisStapleton is #CMAawards Male Vocalist of the Year! Congratulations! ? pic.twitter.com/hm7lYXzmde

This will be Stapleton’s fourth year in a row winning the title for Male Vocalist of the Year. With talent like his, it’s no wonder he took home the award for another year. Stapleton has made a huge impact on the country music industry, even working with icons such as Vince Gill. Stapleton’s talent was first noticed thanks to his top-notch songwriting skills. He has co-written over 170 songs for himself and other artists including George Strait, Luke Bryan, and Sheryl Crow.

With a growing family and a baby on the way, Stapleton has no plans of slowing down!

Congrats to Chris Stapleton for his series of CMA Award wins tonight!