2018 CMA Award For Vocal Duo Of The Year Announced 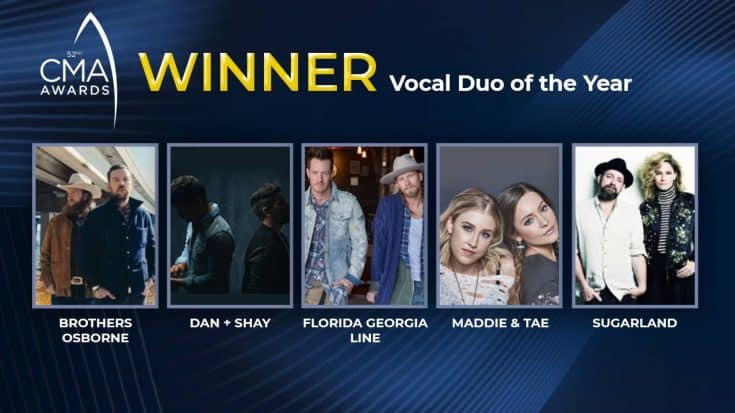 Singing with someone can be a magical experience. It is how we got music from famous duos like Johnny & June, Gram & Emmylou, Brooks & Dunn, Joey & Rory, and Montgomery Gentry. Because of this, it is only right that the CMAs have a special award for Vocal Duo of the Year and this year – it was a close one!

One week, 7 days, or 168 hours. No matter how you say it, #CMAawards are SOON & we CAN'T contain our excitement! Watch next Wednesday at 8|7c on @ABCNetwork. pic.twitter.com/cGTPqxXSLK

Several artists competed for the title, but only one duo could be chosen as Vocal Duo of the Year.

Get to know the nominees for Vocal Duo of the Year! @BrothersOsborne, @DanAndShay, @FloridaGeorgiaLine, @MaddieAndTae and @Sugarland ? Watch the #CMAawards Wednesday at 8|7c on @ABCNetwork.

These brothers have been singing since they were just little guys. After being inspired by their father while growing up in Deale, Maryland – they decided to move to Nashville and try to make it big. Well, it looks like they did.

A fathers love must be truly unconditional to love kids with hair like this. Happy Father's Day Big John!

No longer sporting bull-cuts, the brothers have come out with several hit songs. They already have two CMA Vocal Duo of the Year awards under their belt and many thought they’d be a shoo-in for this year!

These artists came from very different backgrounds. While Dan was raised in Pennsylvania and studied finance at Carnegie Mellon, Shay was from Arkansas and left school early to pursue his music career. But when they first met, they knew it was destiny. Within a day, Dan + Shay were writing together and making plans.

They put out their debut album, Where It All Began and with that – it all begun. The two were in the fast lane and even this past year released “Tequila” which quickly rose to the top of the charts.

The boys of Florida Georgia Line both fell in love with music through the songs they would sing during church worship services. When the two met at Belmont University, they decided to name their duo after their homes – Brian being from Florida and Tyler being a Georgia native.

The wait is finally over! Go #DigYourRoots! Thank you for listening. We love y’all! smarturl.it/DigYourRoots ??

Their debut song, “Cruise” hit the market in 2012 and with that, they went full-throttle into the country world. As they’ve grown lyrically and musically – they have experimented with their music and recently released the pop-country collaboration, “Meant to Be” with Bebe Rexha.

Maddie & Tae met while going to the same vocal coach in Dallas. They jumped into the music world together – traveling back and forth to Nashville on the weekends while going to school during the week. When they graduated, they moved completely and began working full-time on their music career.

Flashback Friday! It's only fitting we sing country music 😉 We love y'all so much! Don't forget to check out our new tunes at maddieandtae.com! Happy Friday! Xoxo ?❤️

The gals won over country fans with their 2015 hit, “Girl in a Country Song” back in Calling out the boys of country – the ladies remind us that “Conway and George Strait never did it this way back in the old days.” This year, they were back at it with their “Friends Don’t” song about two friends on the edge of falling in love.

Sugarland was founded in 2002, the band has proven itself time and again as major players in the country and folk-rock worlds. Composed of Jennifer Nettles and Kristian Bush, the duo has created musical magic with songs like “Something More” – a tune about how there has to be more to life than waking up and going to work.

Surprise! We're in the UK! Here's a quick shot from soundcheck at News of the World (acoustic performance online soon!)…

Posted by Sugarland on Thursday, February 3, 2011

While both artists have had successful solo careers, they are still making music together. This year, they released their Bigger album which includes the fan-favorite song, “Babe” which they recorded with Taylor Swift.

The competition was tough but at the end, Brothers Osborne took the award home!

Congrats to the #CMAawards Vocal Duo of the Year, @BrothersOsborne! ?? pic.twitter.com/lEzSn0UqY3