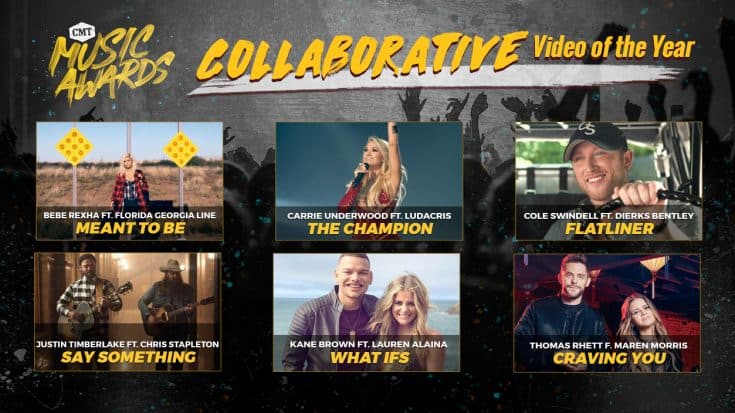 One of the most fun awards, we think, to give out at the CMT Music Awards is Collaborative Video of the Year. Not only does the song have to be good, the two collaborators have to have good enough chemistry to make whatever they are singing about believable.

These nominees have proved they have what it takes to create an epic song, as well as an accompanying music video to go along with it!

Check out the nominees for the 2018 Collaborative Video of the Year award:

The Collaborative Video of the Year winner was announced by Sugarland, and it was none other than “What Ifs” by Kane Brown and Lauren Alaina !

“What Ifs” was an incredible project for both Georgia-natives. They first met in middle school choir, where Lauren actually encouraged Kane to sing. Years later, they have a chart-topping single together that has been making waves, including ending Sam Hunt’s record-breaking 32-week reign at number one with “Body Like A Backroad.”

The music video for “What Ifs” has racked up over 142 million views, making it a no-brainer for Collaborative Video of the Year winner! Congrats to Kane and Lauren! Watch their winning music video below.