By Miranda Raye on November 11, 2020
Advertisement 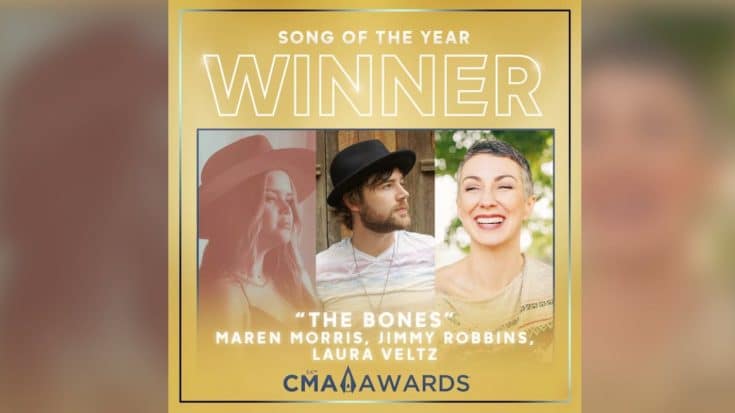 It’s important for those who watch the CMA Awards to understand the difference between two similar categories: Song of the Year and Single of the Year.

Here are a couple examples from the past:

The 2020 nominees for the CMA’s Song of the Year Award were all songs that were co-written by at least one of the artists who recorded them. And speaking of Combs, he was actually nominated twice in the category this go around!

The #CMAawards SONG of the Year nominees are…

Here were all of the nominees:

If you didn’t get the chance to hear the winning song be announced during the CMA’s ceremony on Wednesday (November 11) we have the news for you right here. Are you ready to find out who won?

The winner is none other than…”The Bones” by Maren Morris.

“The Bones” was one of the most impactful songs in country music this year, so it makes perfect sense why it won this award. It was a #1 hit on both the Country Airplay chart and Hot Country Songs chart, and reached the 12th position on the all-genre Billboard Hot 100.

The track was recorded by Maren Morris and was co-written by Morris, Jimmy Robbins, and Laura Veltz. This is all three writers’ first win in the category.

Join us in congratulating Morris, Robbins, and Veltz for writing the 2020 CMA Song of the Year! You can celebrate by giving “The Bones” a listen in the clip below.

“The Bones” also won the award for Single of the Year earlier in the night, which is impressive!